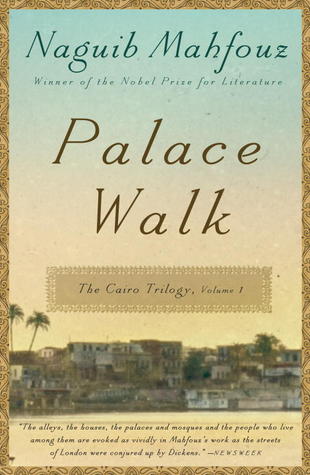 Part 1 of the Cairo Trilogy. I love big books, I love family sagas, I love historical fiction, I love books by Nobel Prize winners, so this should definitely the book for me.

And it is. The story of an Egyptian family between 1917 to 1919. We get to know al-Sayyid Ahmad Abd al-Jawad who rules his family like a tyrant, his wife, his daughters and his sons, they all have to obey him without question. He is by far not a perfect person himself but expects this from everyone around him. Given the time, everyone accepts this as a God-given law.

Brilliantly told, Naguib Mahfouz is a fantastic observer, he mentions so many things, describes people's feelings in a way that is unique and highly commendable. We can imagine being a fly on the wall who notices everything that is going on. I would love to read a book Mahfouz would write now about the same family, well, their progeny. The author managed to create a family that seems so real, so alive. We can well imagine meeting them somewhere. A very realistic story.

I already have the follow-up "Palace of Desire" on my table waiting to be read next and will certainly also read the last part "Sugar Street".

This book is also on the list of "The non-western books that every student should read".

"Palace Walk is the first novel in Nobel Prize-winner Naguib Mahfouz’s magnificent Cairo Trilogy, an epic family saga of colonial Egypt that is considered his masterwork.

The novels of the Cairo Trilogy trace three generations of the family of tyrannical patriarch al-Sayyid Ahmad Abd al-Jawad, who rules his household with a strict hand while living a secret life of self-indulgence. Palace Walk introduces us to his gentle, oppressed wife, Amina, his cloistered daughters, Aisha and Khadija, and his three sons - the tragic and idealistic Fahmy, the dissolute hedonist Yasin, and the soul-searching intellectual Kamal. The family’s trials mirror those of their turbulent country during the years spanning the two world wars, as change comes to a society that has resisted it for centuries."

Naguib Mahfouz "who, through works rich in nuance - now clear-sightedly realistic, now evocatively ambiguous - has formed an Arabian narrative art that applies to all mankind" received the Nobel Prize for Literature in 1988.

I contribute to this page: Read the Nobels and you can find all my blogs about Nobel Prize winning authors and their books here.
Posted by Marianne at 15:06