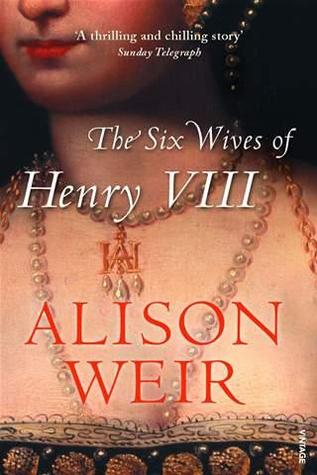 After reading "Six Tudor Queens. Katherine of Aragon. The True Queen", I discovered that Alison Weir is not just going to write a book about every single one of Henry VIIIs wife but that she has already written a description of all their lives. In this book. I just had to go and read it.

Just as in the novel I read, we get to know the characters very well. There is so much information here about the six ladies who were married to Henry VIII as well as a lot about the king  himself and the children. You get a complete picture of the Royal Tudor family, not just the Tudors but all their contemporaries, the European Royal families, the people and families of influence a the time. At the beginning of the book, you find a chronology beginning with the Battle of Bosworth in 1458 and ending with the accession to the throne by Elizabeth I. in 1558. At the end there are several family trees of the families involved. There is so much to learn and Alison Weir makes it so easy to get into the lives of the people living at the time. I sometimes got confused with people having two different names, e.g. if someone is a Duke or an Earl he is named by his title but he also has a Christian name and you only see the relationship to his family by that name. But, the author has thought about that, as well. There is an Index at the end that gives you all the names and pages where they are mentioned.

I always found the Tudors interesting but this book taught me more than all the other books and documentations I read about them. A well written non-fiction book that reads almost like a novel and comprises everything you would look for in almost every other genre. Love and friendship, birth and death, murder, intrigues, betrayal, religion and politics and, of course, politics. What else do you need to find a fascinating book?

From the back cover:
"One of the most powerful monarchs in British history, Henry VIII ruled England in unprecedented splendour. In this remarkable composite biography, Alison Weir brings Henry's six wives vividly to life, revealing each as a distinct and compelling personality in her own right.

Drawing upon the rich fund of documentary material from the Tudor period, The Six Wives of Henry VIII shows us a court where personal needs frequently influenced public events and where a life of gorgeously ritualised pleasure was shot through with ambition, treason and violence."

Find my reviews of Alison Weir's other books here.
Posted by Marianne at 16:25