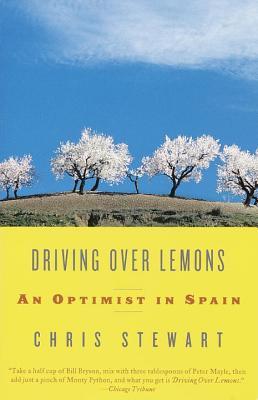 Stewart, Chris "Driving over Lemons. An Optimist in Spain" - 1999

As a Genesis fan, I knew the name Chris Stewart, of course, but I didn't think the former drummer of this fabulous band was also a farmer in Spain and had written a book about it. And what an interesting one. I have read a few of these books about someone from a more Northern and/or richer country going to Southern Europe (Spain, France, Italy) to get away from it all, buy an old house, raise vegetables and some animals … I'm sure we all have.

This is a nice account of someone who changed his life at a young age and never looked back. We get to laugh with him about all the little problems that arise and rejoice about any little progress he makes.

From the back cover:
"When English sheep shearer Chris Stewart (once a drummer for Genesis) bought an isolated farmhouse in the mountains outside of Granada, Spain, he was fully aware that it didn't have electricity, running water, or access to roads. But he had little idea of the headaches and hilarity that would follow (including scorpions, runaway sheep, and the former owner who won't budge). He also had no idea that his memoir about southern Spain would set a standard for literary travel writing.

This rip-roaringly funny book about seeking a place in an earthy community of peasants and shepherds gives a realistic sense of the hassles and rewards of foreign relocation. Part of its allure stems from the absence of rose-colored glasses, mainly Stewart's refusal to merely coo about the piece of heaven he's found or to portray all residents as angels. Stewart's hilarious and beautifully written passages are deep in their honest perceptions of the place and the sometimes xenophobic natives, whose reception of the newcomers ranges from warm to gruff.

After reading about struggles with dialects, animal husbandry, droughts, flooding, and such local rituals as pig slaughters and the rebuilding of bridges, you may not wish to live Chris Stewart's life. But you can't help but admire him and his wife, Ana, for digging out a niche in these far-flung mountains, for successfully befriending the denizens, and for so eloquently and comically telling the truth. The rich, vibrant, and unromanticized candor of Driving over Lemons makes it a laudable standout in a genre too often typified by laughable naiveté."

Chris Stewart also writes two blogs, one in English, one in Spanish , you can get a little glimpse of his life here, as well.

Driving over Lemons
Listisimo
Posted by Marianne at 17:52