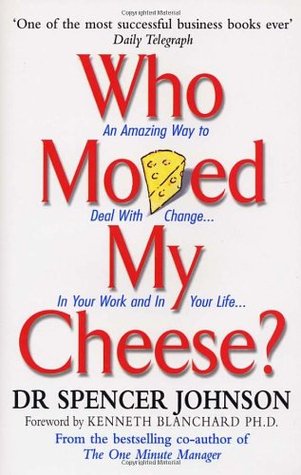 I read this book ages ago, really liked it. It's a parable about two mice and two men who live in a maze. They all want the cheese but they all tackle the task differently. We can learn from their mistakes, see that it is important to stay alert. And to be flexible, very important!

I wouldn't say it helped me get organized but I thought a lot about who I would be, who other people would be, etc. There is also a children's version. My son (who was a lot younger at the time)  borrowed it from the library, it's easier and with pictures, but the same concept and quite nicely done for children.

"Written by Spencer Johnson, coauthor of The One Minute Manager, this enlightening and amusing story illustrates the vital importance of being able to deal with unexpected change. Who Moved My Cheese? is often distributed by managers to employees as a motivational tool, but the lessons it teaches can benefit literally anyone, young or old, rich or poor, looking for less stress and more success in every aspect of work and life."
Posted by Marianne at 10:46