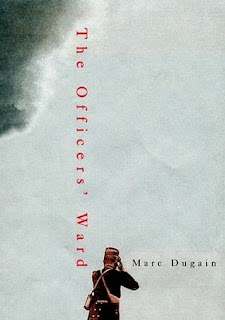 Another book club read, suggested by our French member. Not a big book like the one we read before, fewer than 160 pages, almost a short story.

Adrien meets other wounded men and even one woman and they form a bond only those who have a similar fate can form. A friendship starts that will last beyond the war, for the rest of their lives.

This is a simple stories, told in simple words and simple sentences (that's why I had no trouble reading it in French). It is an interesting story but I would have liked it to be a little more elaborate, a little deeper.

However, we had a wonderful talk about this. Most of us found the story sad but also showing a lot of hope, showing how the human side comes through when nothing else is left. How in the end we are all the same.

We discussed this in our book club in May 2015.

"In autumn 1914, on one of the first days of shooting, Adrien Fournier, a lieutenant in the French Army, leads a reconnaissance mission to the Meuse River. From the opposite bank, German mortar fire blasts the team, killing all but Adrien who is hit in the face by shrapnel. He sustains terrible injuries. In the ensuing years, Adrien is left to wonder whether it would have been better had he, too, died that day on the river.

* Adrien is sent to the hospital at Val-de-Grace on the outskirts of Paris - to a closed ward without mirrors, reserved for those who have been disfigured. He will never know the incredible hardships his comrades will suffer in the trenches, nor the agony of a long war that most expected to last only a few months.

* Instead, Adrien's war is an endless round of pain and reconstruction and this one room, which he shares with a Jewish aviator and a Breton aristocrat. Between bouts of surgery, a special bond of friendship forms among these faceless men. And when a once-beautiful woman joins their group, Adrien discovers that hope, humanity, and humor can endure even there, in the officers' ward."
Posted by Marianne at 17:03