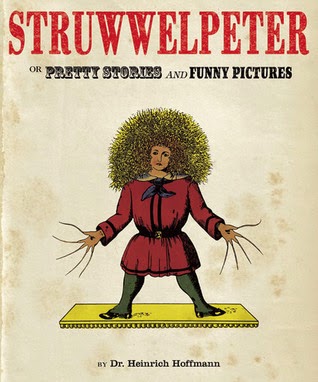 Not necessarily my most favourite children's book but it's a classic German one that I know from my childhood and that is still around. The author was a doctor and nowadays people think that everything in this book is too cruel. But thousands and thousands of children grew up with them and I don't remember suffering from them - same as with fairy tales that are supposed to be too cruel now and need to be sugarcoated. In general, children have a good sense of justice and even think that the characters deserve the punishment.

In the book itself, children are punished for their "deeds". Some of them don't sound too bad but some really are not very nice but the punishments are all pretty harsh. For example, there is the boy who won't eat his soup but then there is also one who terrorizes animals.

The author wrote and illustrated this book for his own three-year old son.

The book has been so popular in the past that there are a lot of adaptations/new versions of it, the most popular one probably "Struwwelliese", the female version. It has also been translated into many different languages.

Some of the stories have been taken over into the German language, if we talk about a "Zappelphillipp", for example, we talk about a child who cannot sit still. Nowadays, in German we talk about the "Zappelphillipp-Syndrom" when talking about ADHD A lot of the problems the kids have in the book are also taken into account in psychology, Dr. Hoffmann certainly was ahead of his time.

"Pauline knew not to play with matches, Philip's parents told him not to fidget, and Conrad was duly warned about the tailor who snips off thumbsuckers' thumbs - a morbidly hilarious, much-loved classic volume of cautionary verses

In December 1844, Dr. Heinrich Hoffmann, a German doctor, couldn't find a suitable book to give his three-year-old son as a Christmas present. Instead he bought a blank book and set out to write and draw what was to become his world-famous picture book. Hoffmann filled his book with dazzling and gruesome stories and pictures that he had invented to try to put his frightened young patients at their ease. After its publication in 1845, the book's popularity continued to grow and it has been published in thousands of editions throughout the world.

Now just over 150 years old, Struwwelpeter (Slovenly Peter) is an unforgettable and morbid collection of stories that show children the horrific outcomes of naughty behavior. Other characters in this classic collection of cautionary tales include Simple Hans, Phoebe Ann, the proud girl and Jimmy Sliderlegs."
Posted by Marianne at 18:10