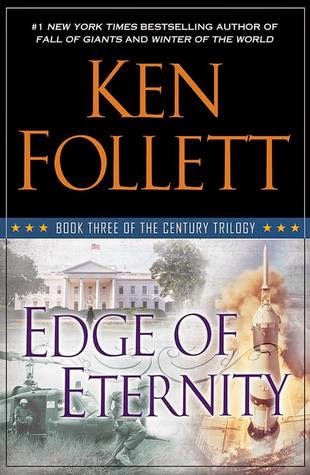 When I first learnt there was a trilogy about the past century, each part concentrating on a different war: First, Second and Cold, I thought the last one might be the one that least interests me. After all, I've been there, I lived during the Cold War, I keep telling my kids how it was - and probably bore them to death.

However, I only was there during part of the Cold War, I only lived the West German one, not the East German, the Russian or the American one. I think my part was closest to that of the English and Welsh families in the story, after all, we had free elections and could do as we pleased.

As in the previous parts, the author introduces the characters from the different families one by one and most of them are very close to some important people. They either work for Martin Luther King and Robert Kennedy, Khrushchev or there is a fictional character who resembles Solchenitsyn ... lots of true life connections that explain what happened in that time. Of course I knew about the civil rights movement but this book has taught me more about it, and I am sure it teaches others more about the parts they don't know.

I was surprised that some people had given this book a bad rating, I think that is mainly because they didn't agree with the way history was portrayed, their view were a little (or a lot) different from Ken Follett. Compared to American Republicans, most Europeans seem to be communists and that is the most evil of them all.

Well, I enjoyed all three books. A lot. I grew to love the characters, I felt like I was part of their families or at least a close friend of them. All together, I read about 3,000 pages of wonderful storytelling. And I am still in awe of the amount of research Ken Follett must have done for this.

"Ken Follett’s Century Trilogy follows the fortunes of five intertwined families - American, German, Russian, English, and Welsh - as they make their way through the twentieth century. It has been called 'potent, engrossing' (Publishers Weekly) and 'truly epic' (Huffington Post). USA Today said, 'You actually feel like you’re there.'

Edge of Eternity, the finale, covers one of the most tumultuous eras of all: the 1960s through the 1980s, encompassing civil rights, assassinations, Vietnam, the Berlin Wall, the Cuban Missile Crisis, presidential impeachment, revolution - and rock and roll.

East German teacher Rebecca Hoffman discovers she’s been spied on by the Stasi for years and commits an impulsive act that will affect her family for generations… George Jakes, himself bi-racial, bypasses corporate law to join Robert F. Kennedy’s Justice Department and finds himself in the middle of not only the seminal events of the civil rights battle, but also a much more personal battle… Cameron Dewar, the grandson of a senator, jumps at the chance to do some espionage for a cause he believes in, only to discover that the world is much more dangerous than he’d imagined… Dimka Dvorkin, a young aide to Khrushchev, becomes an agent for good and for ill as the Soviet Union and the United States race to the brink of nuclear war, while his twin sister, Tania, carves out a role that will take her from Moscow to Cuba to Prague to Warsaw - and into history.

These characters and many others find their lives inextricably entangled as they add their personal stories and insight to the most defining events of the 20th century. From the opulent offices of the most powerful world leaders to the shabby apartments of those trying to begin a new empire, from the elite clubs of the wealthy and highborn to the passionate protests of a country’s most marginalized citizens, this is truly a drama for the ages.

With the Century Trilogy, Follett has guided readers through an entire era of history with a master’s touch. His unique ability to tell fascinating, brilliantly researched stories that captivate readers and keep them turning the pages is unparalleled. In this climactic and concluding saga, Follett brings us into a world we thought we knew, but now will never seem the same again."