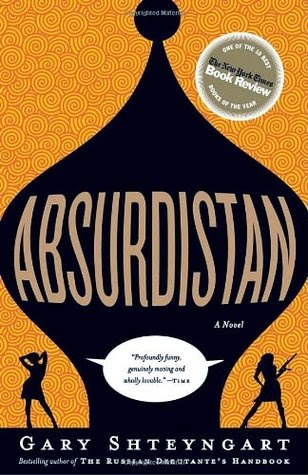 Certainly a funny book. Quite weird actually. A novel about sex, drugs and rock'n roll but in today's times. However, in a country that still lives in the sixties, I suppose. Absurdistan, a fictional country near the Kaspian Sea. Misha, the son of a rich Russian who has earned his title of 1,237th rich man in Russia under obscure and certainly not very legal circumstances, never had to work and is now not just an orphan but also homeless. The US, where he lived before his father's death, doesn't want to let him in, he doesn't want to stay in Russia, so maybe Absurdistan is the solution.

If you don't mind swearwords, you might actually enjoy the novel. If you don't like them, this is not for you.

I am sure the author Gary Shteyngart, who has a lot in common with his protagonist, meant this book as a satire and I think he did a good job. Goal achieved.

From the back cover: "Open Absurdistan and meet outsize Misha Vainberg, son of the 1,238th-richest man in Russia, lover of large portions of food and drink, lover and inept performer of rap music, and lover of a South Bronx Latina whom he longs to rejoin in New York City, if only the American INS will grant him a visa. But it won't, because Misha's late Beloved Papa whacked an Oklahoma businessman of some prominence. Misha is paying the price of exile from his adopted American homeland. He's stuck in Russia, dreaming of his beloved Rouenna and the Oz of NYC.
Salvation may lie in the tiny, oil-rich nation of Absurdistan, where a crooked consular officer will sell Misha a Belgian passport. But after a civil war breaks out between two competing ethnic groups and a local warlord installs hapless Misha as Minister of Multicultural Affairs, our hero soon finds himself covered in oil, fighting for his life, falling in love, and trying to figure out if a normal life is still possible in the twenty-first century.
Populated by curvaceous brown-eyed beauties, circumcision-happy Hasidic Jews, a loyal manservant who never stops serving, and scheming oil execs from a certain American company whose name rhymes with Malliburton, Absurdistan is a strange, oddly true-to-life look at how we live now, from a writer who should know."
Posted by Marianne at 12:46