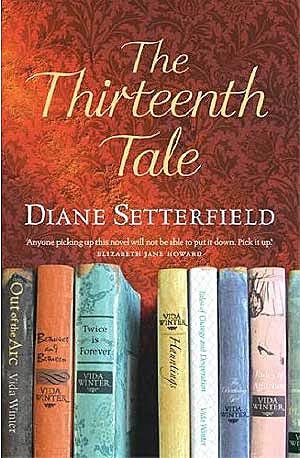 Margaret Lea is a non-fiction author who has written several biographies about dead personalities. Now she gets offered a job to write down the life of one of the most famous but also most secretive authors in England, Vida Winter. She has written twelve stories about her life, all of them more fictitious than any of her own stories which I probably wouldn't want to read. The titles look quite chick lit-ish but we don't have to read the stories in order to read "The Thirteenth Tale".

The author and her biographer find they have something in common, they are both twins and Margaret's mother has not coped well with the loss of the twin sister.

While Margaret listens to Vida's life story, she doesn't just get to know the twins Emmeline and Adeline and everyone else at Angelfield House, she discovers a lot about herself but also about the secret parts Vida doesn't tell. A big surprise waits at the end.

This is quite an interesting story, even though I wouldn't call it great literature. But nice to read.

Even though I have not read all of them, I'd rather read the remainder than any of the books "written" by Vida Winter (according to the cover picture):
The Puppet Show
Rules of Affliction
The Birthday Girl
(13) Tales of Change and Desperation
Hauntings
Twice is Forever
Betwixt and Between
Out of the Arc

"Reclusive author Vida Winter has created several 'biographies' for herself, each one different, but now she wants to tell the truth. When she asks Margaret Lea to write her biography Margaret is reluctant - not least because of the family secrets she herself is guarding so painfully.
Margaret's research takes her to Angelfield House and into Vida's enigmatic past - and what she uncovers sheds a troubling light on her own life."

While visiting Miss Winter in her bedroom, Margaret discovers a picture they talk about. It's called "Dickens' Dream" and was painted by Robert W. Buss.
There is some information on these pages:
Dickens Picture by Robert W. Buss
"Dickens Dream"
Robert Williams Buss
Posted by Marianne at 14:04