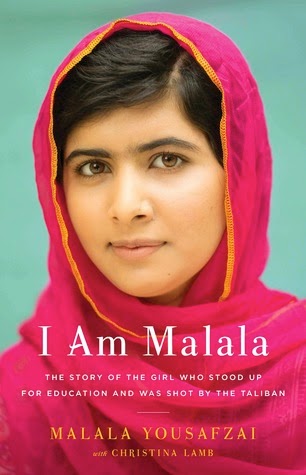 Yousafzai, Malala; Lamb, Christina "I am Malala. The Girl Who Stood Up for Education and Was Shot by the Taliban" - 2013

Everybody talks about freedom all the time. Freedom of education, freedom of speech, freedom of religion. We all know about the Taliban and what they do to the people in the countries they occupy, especially the women.

And here is a young girl who has always spoken out for freedom, who has been fighting for education her whole life, disregarding any threats she received, disregarding anything that we in our Western world would notice right away if we had to live like that. We take so many things for granted. We send our children to school and don't even think about the fact that this right had to be fought for at some point.

This young girl went to school even though it was against the law in her country and got shot by some madmen, some extremists who believe that if you keep the people stupid you can rule over them a little longer. They are right, but you don't have to have an education to be smart, some people are not that stupid, even if you deny them the education. Malala is a great example for them. As a "reward" for her efforts, she was shot and could have died if it hadn't been for some determined doctors to save her life.

In this book, Malala describes her life before and after the shooting, her life and that of her sisters in Pakistan.

Malala Yousafzai is a courageous and brave woman who will get far in this world. I know she will continue to fight for the right of all girls to get a decent education. I hope we can all support her in our own way.

I also loved that a non-fiction writer who I admire very much and who knows a lot about that part of the world helped Malala write down her story. I have read "The Sewing Circles of Herat" and "The Africa House" by Christina Lamb and thought they were both excellent.

"I come from a country that was created at midnight. When I almost died it was just after midday.
When the Taliban took control of the Swat Valley in Pakistan, one girl spoke out. Malala Yousafzai refused to be silenced and fought for her right to an education.

On Tuesday, October 9, 2012, when she was fifteen, she almost paid the ultimate price. She was shot in the head at point-blank range while riding the bus home from school, and few expected her to survive.

Instead, Malala's miraculous recovery has taken her on an extraordinary journey from a remote valley in northern Pakistan to the halls of the United Nations in New York. At sixteen, she has become a global symbol of peaceful protest and the youngest-ever Nobel Peace Prize laureate.I Am Malala is the remarkable tale of a family uprooted by global terrorism, of the fight for girls' education, of a father who, himself a school owner, championed and encouraged his daughter to write and attend school, and of brave parents who have a fierce love for their daughter in a society that prizes sons.
It will make you believe in the power of one person's voice to inspire change in the world."

Malala Yousafzai and Kailash Satyarthi  received the Nobel Peace Prize in 2014 "for their struggle against the suppression of children and young people and for the right of all children to education."

I contribute to this page: Read the Nobels and you can find all my blogs about Nobel Prize winning authors and their books here.
Posted by Marianne at 13:53