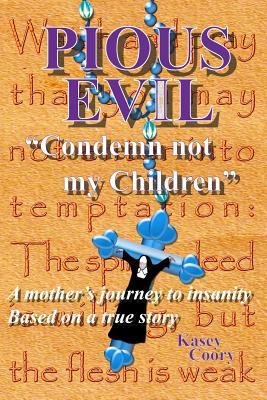 Coory, Kasey "Pious Evil. Condemn not my Children. A mother's journey to insanity" - 2014

If you don't like to read about other people's misery, don't read this book. The Coory family has had more than their fair share of misery. I already read the book written by the authors sister, Anne Frandi-Coory "Whatever Happened to Ishtar?", and wanted to hear the voice of another family member when I heard her brother had written a book, as well. A lot of the family circumstances were already known to me but I am sure I would have understood them even without reading the other book first. What I want to say, it doesn't matter which one you read first, they both tell their part of a story, a story of a malfunctioning "family", a story of a miserable childhood but also of miserable adults. Why is it that people who already live in more than bad circumstances, always find other people just like that. Couldn't they find just one normal functioning person to help them to start a better life?

The book tells us a lot about the hardships in a big family that hasn't learned how to deal with their life in a new culture but especially about the tragic life children have to lead in these kind of families. It makes you want to go out and help them, in any way possible. That the author and his siblings have found their way into an ordinary life is more a miracle and certainly the exception rather than the rule. It can't have been easy. It also tells us about the church and their misgivings that were certainly responsible for a lot of the misery of the children.

Same as in "Whatever Happened to Ishtar?", one tragedy follows another, they slither from one bad situation into a worse one.

What I would have loved in this book though is a sort of family tree because there are many many members in that family and sometimes it is hard to find the connections. Luckily, you can find one online on Anne Frandi-Coory's page "A Life in Two Halves". It helps checking the situation from time to time.

As I said above, don't read this book if you cannot bear to hear about other people's misery but if you think you might want to do something to make this world a better place, to understand the background of tragedy, this is the book for you.

From the back cover: "Based on a true story, Pious Evil is an historical narrative of prejudice and intrigue. A revealing chronicle of a manic depressive mother, who is deprived of her children, as seen through the eyes of a disparaged and vulnerable child. A deviant priest rapes a nun. She is sworn to silence in a cover up by the Church to avoid scandal. She is then ostracized and married off to the deviant's older brother, with unforeseen consequences. A mother is propositioned to sell her baby daughter, who is blessed with beautiful auburn hair. She is eager to execute a betrayal in an endeavour to gain freedom from her despised husband. Pious Evil is an autobiographical saga of two families who immigrate to New Zealand at the turn of the twentieth century. The Patriarchs and their wives weave a tapestry of Piousness and Evil, which is revealed in the machinations of the following generations."
Posted by Marianne at 13:46