Mak, Geert "In Europe. Travels through the twentieth century" 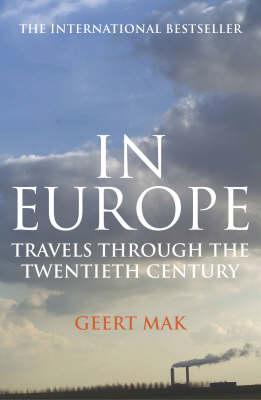 The 20th century. What a century it was. If we are older than 20 years, we might remember part of it. I remember the last half. The better half I would think, the peaceful half, the one where war only loomed around the corner but was never present. At least not in the part of the world where I lived.

Geert Mak is an excellent Dutch journalist who has written several non-fiction books about life in general and in particular in this part of the world (I reviewed "Jorwerd: The Death of the Village in late 20th Century" here.)

With this work he has excelled himself. He travels through Europe (not just in the book but also in real life) and describes every decade through the country he is just visiting. Some of them he has to visit several times, of course.

In any case, he gives a brilliant overview about the century that changed everyone's life (and not just that of the Europeans) forever. Let us learn from the mistakes made in the past. Reading a book like this one could help us all understanding those mistakes better and trying to avoid them for a better and more peaceful world.

"From the First World War to the waning days of the Cold War, a poignant exploration on what it means to be European at the end of the twentieth-century. Geert Mak criss-crosses Europe from Verdun to Berlin, Saint Petersburg to Srebrenica in search of evidence and witnesses of the last hundred years of Europe. Using his skills as an acclaimed journalist, Mak locates the smaller, personal stories within the epic arc of history-talking to a former ticket-taker at the gates of the Birkenau concentration camp or noting the neat rows of tiny shoes in the abandoned nursery school in the shadow of Chernobyl. His unique approach makes the reader an eyewitness to a half-forgotten past, full of unknown peculiarities, sudden insights and touching encounters. Sweeping in scale, but intimate in detail 'In Europe' is a masterpiece."
Posted by Marianne at 12:24