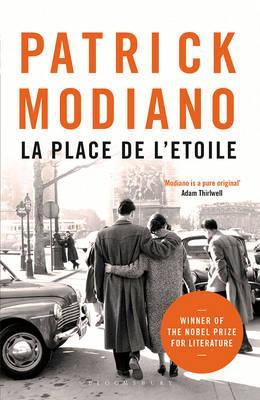 An interesting book, certainly a challenging book. The author was quite young, only 23 years old, when he wrote this, his first book that led eventually to him receiving the Nobel Price for Literature.

Patrick Modiano starts with a little story which could be called a joke if it wasn't so sad:
"In June 1942, a German officer approaches a young man and says: 'Excuse me, monsieur, where is the Place de l’Etoile?' The young man points to the left side of his chest. - A Jewish History". The young man is, of course, alluding to the star of David that was required to be worn by all Jews rather than the famous place in Paris.

Then he carries on talking about his protagonist, Raphaël Schlemilovitch and his way of surviving or not surviving the holocaust. It took me a while to realize what he was doing. He is living the lives of many and has an almost magic realistic but certainly an immensely sarcastic style in describing this. We meet many famous Jews and non-Jews who have made history both past and present in his stories.

I don't know whether this is the main book why the author was awarded the Nobel Prize for Literature and whether this is a typical novel by him but I certainly would not classify it as an "easy read". Still, if you are interested in this history, you might enjoy it.

"The first novel by the winner of the Nobel Prize for Literature 2014, which with The Night Watch and Ring Roads forms a trilogy of the Occupation.

This astonishing first novel by one of France's greatest living writers was among the earliest to seriously question both wartime collaboration in France and the myths of the Gaullist era. The epigraph reads:

In June 1942 a German officer goes up to a young man and says: 'Excuse me, monsieur, where is La Place de l'Étoile?' The young man points to the star on his chest.

The narrator of this wild and whirling satire is a hero on the edge, who imagines himself in Paris under the German Occupation. Through his mind stream a thousand different possible existences, where sometimes the Jew is king, sometimes a martyr, and where tragedy disguises itself as farce. Real and fictional characters from Maurice Sachs and Drieu La Rochelle, Marcel Proust and the French Gestapo, Captain Dreyfus and the Petainist admirals, to Freud, Hitler and Eva Braun spin past our eyes. But at the centre of this whirligig is La Place de l'Étoile, the geographical and moral centre of Paris, the capital of grief.

With La Place de l'Étoile Patrick Modiano burst onto the Parisian literary scene in 1968, winning two literary prizes, and preparing the way for the next two books - The Night Watch and Ring Roads - in what is regarded as his trilogy of the Occupation."

Patrick Modiano received the Nobel Prize for Literature in 2014 "for the art of memory with which he has evoked the most ungraspable human destinies and uncovered the life-world of the occupation".

I contribute to this page: Read the Nobels and you can find all my blogs about Nobel Prize winning authors and their books here.
Posted by Marianne at 17:39