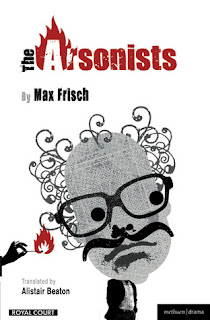 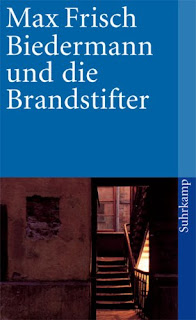 Frisch, Max "The Arsonists" (aka "The Firebugs" or "The Fire Raisers: A Morality Without A Moral, With An Afterpiece") (Biedermann und die Brandstifter) - 1958

One of the books almost every German students has to read in the upper classes. And I think it would be great if other students would read this, too. And adults. Because Max Frisch is a fabulous author who teaches us a lot.

Max Frisch is a satirical, dark writer. He shows this very well in this play. Gottlieb Biedermann is a rich person who is upset that some arsonists are in town who start living in people's houses while intending to burn them down. Even though he knows this, he takes in two alleged salesmen who behave just the way as if they did want to burn down his house. We can follow Biedermann's downfall slowly but surely. The characters develop and we can see that quite clearly, too.

The name Biedermann comes from the German word "bieder" which is a more satiric/negative meaning of conservative, conventional, upright. The right description for our protagonist.

The morale of this story: If you tell people the truth, they will let you do anything, even burn down your house.

From the back cover: "Fires are becoming something of a problem. But Biedermann has it all under control. He's a respected member of the community with a loving wife and a flourishing business, so surely nothing can get to him. The great philanthropist is happy to meet his civic duty by giving shelter to two new guests but when they start filling his attic with petrol drums, will he help them light the fuse?
Max Frisch's parable about appeasement is given its first major UK revival since its Royal Court premiere in 1961, which was directed by Lindsay Anderson.
The play is published as a programme text for the production that runs from 1 November - 15 December on the main stage at the Royal Court."

Max Frisch received the Peace Prize of the German Book Trade (Friedenspreis) in 1976.

I also read "Homo Faber" by the same author.
Posted by Marianne at 15:53