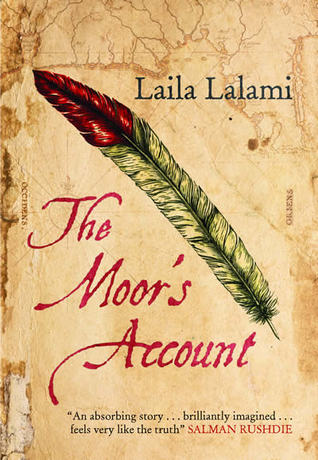 What a fantastic way of retelling history. "The Moors' Account" tells us a story that has been told before - but by Spanish people, white people who came as conquerors to the new continent to be called America. This is told by one of their slaves, a guy from Morocco, who survives a lot of ordeals because of his determination to get back home again. Out of the 600 people who went on an expedition in 1527, only four survive and Mustafa, who was renamed Estebanico by the Spaniards, was one of them.

We don't just learn about the expedition and how life in America was before the Europeans arrived, we also learn about life in Morocco at the time.

Totally interesting story, told in alternating chapters, switching from Morocco to American and back. I also loved that we hear the history from another side.

It's interesting to learn that we only have one line about Mustafa in an account of one of the three others (Cabeza de Vaca): "The fourth [survivor] is Estevanico, an Arab Negro from Azamor." It's amazing, how Laila Lalami fashioned such a great story from it.

"The Moor's Account" was on both the Pulitzer Prize and Man Booker Prize longlist. Totally deserved it. I'm looking forward to more books by this author.

From the back cover: "In 1527 the Spanish conquistador Pánfilo de Narváez arrived on the coast of modern-day Florida with hundreds of settlers, and claimed the region for Spain. Almost immediately, the expedition was decimated by a combination of navigational errors, disease, starvation and fierce resistance from indigenous tribes. Within a year, only four survivors remained: three noblemen and a Moroccan slave called “Estebanico”.

The official record, set down after a reunion with Spanish forces in 1536, contains only the three freemen’s accounts. The fourth, to which the title of Laila Lalami’s masterful novel alludes, is Estebanico’s own.

Lalami gives us Estebanico as history never did: as Mustafa, the vibrant merchant from Azemmur forced into slavery and a new name, and reborn as the first black explorer of the Americas, discovering and being discovered by various tribes both hostile and compassionate.

In Estebanico’s telling, the survivors’ journey across great swathes of the New World transforms would-be conquerors into humble servants and fearful outcasts into faith healers. He remains ever-observant, resourceful and hopeful that he might one day find his way back to his family, even as he experiences an unexpected (if ambiguous) camaraderie with his masters.

The Moor’s Account illuminates the ways in which stories can transmigrate into history, and how storytelling can offer a chance for redemption, reinvention and survival."
Posted by Marianne at 13:08