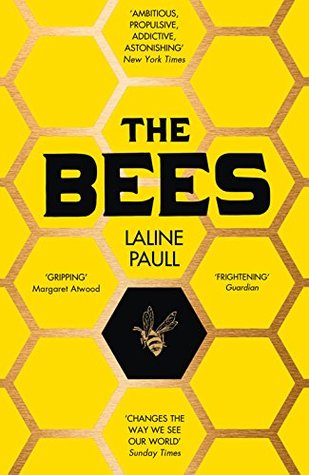 The story about a bee who does not conform with what she is supposed to be doing, she is smarter than other bees from her status, she is "above her class".

This book has given me a lot to think about. At times I felt the story could have been about me, as well, I feelt quite a connection to Flora, the worker bee, the one born into the lowest class who should have been grateful for anything she had. But she wasn't, she wanted more, she wanted to do more, not just be more. But it is hard to get up even one step on a ladder in a society that puts you in a certain drawer.

Anyway, the story was written very well, the whole bee society was described with a lot of detail. It is certain that the author doesn't just want to write about bees but about humans and their society, about how we deal with someone who is different, who doesn't "belong", who doesn't fit in a certain "norm". Does anyone ever fit? Aren't we all born to be special?

What I did not like very much was the way the bees were given a human-like religion. I am sure no bee has to worship the queen bee, they all work so she can survive and the whole hive can survive, but they work on instinct rather than any religious rules. This is one of the problems I have with science fiction and fantasy, some human behaviour just does not transfer into the animal kingdom and/or outer space etc. The whole religion part was a little too much for me.

From the back cover: "Flora 717 is a survivor. Born into the lowest class of the totalitarian hive society she is prepared to sacrifice everything for the Queen, surviving internal massacres, religious purges and terrifying invasions by vicious wasps. With each act of bravery her status grows, revealing both the enemies within and the sinister secrets that rule the hive. But when her instinct to serve is overwhelmed by a fierce and deeply forbidden maternal love, she breaks the most sacred law of all..."
Posted by Marianne at 11:56