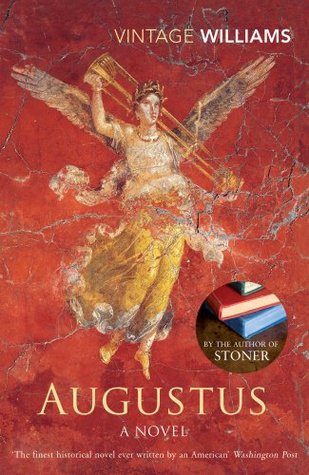 I always say I mostly read about the Roman times in the Astérix comics and they are really not bad if you have no idea about what was going on during Julius Cesar's times.

This book is about his successor, told by himself, his daughter and many many of his friends and enemies. Highly interesting to read about all the intrigues and what was going on behind the scenes.

I would have loved a list in the back with the names of the people and how they were related to each other. It's a good thing we have Google nowadays, otherwise I might have been lost as I can imagine people in the seventies were when they first read the book.

However, it still is a very good book if you want to learn about the Romans. Just heed my advice, make a list, see who is who and what they were in relation to Augustus.

Augustus certainly was a very impressive emperor, a man who was catapulted into a position at a young age, who had to take responsibility for a huge country. His reign lasted 40 years and was known as the Pax Romana, the Roman peace because that's what he did, he brought peace to most of his country, often at a huge cost but nonetheless very successful.

Apparently, the author has written only three books, this one, "Stoner" a campus novel and "Butcher's Crossing", a Western. I might attempt one of his other books one day.

From the back cover:
"After the brutal murder of his great-uncle, Julius Caesar, Octavian, a shy and scholarly youth of nineteen, suddenly finds himself heir to the vast power of Rome. He is destined, despite vicious power struggles, bloody wars and family strife, to transform his realm and become the greatest ruler the western world had ever seen: Augustus Caesar, the first Roman Emperor.
Building on impeccable research, John Williams brings the legendary figure of Augustus vividly to life, and invests his characters with such profound humanity that we enter completely into the heat and danger of their lives and times."
Posted by Marianne at 12:27