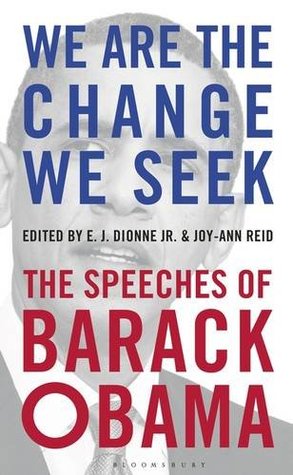 Barack Obama was a great president with hope for a better world. His speeches show that. The ones that are shown in this book are probably amongst his most important ones and they were all fantastic.

Many people should read this, especially those who hope that the present incumbent will be better. There is now way that is going to happen.

We need more people like him, this world would be a better place. And I am sure, even though he is not the president any more, that we'll hear more from hm and that he'll continue his work. He is a born leader and speaker and he can encourage people to work for their country and therefore for the world.

After "Dreams From My Father", "The Audacity of Hope" by Barack Obama, "The World As It Is" by Ben Rhodes, "Promise Me, Dad" by Joe Biden and "Becoming" by Michelle Obama, this was the sixth book I read about the president. They were all great reads to get to know this man and his dream a little better.

In his speeches as president, Barack Obama had the power to move people from all over the world as few leaders before him. We Are the Change We Seek is a collection of twenty-seven of Obama's greatest speeches, covering the issues most important to our time: war, inequality, race relations, gun violence and human rights. With brief introductory remarks explaining the context for each speech, this is a book to inform, illuminate and inspire, providing invaluable insight into a groundbreaking and era-defining presidency."

Barack Obama received the Nobel Prize for Peace in 2009 "for his extraordinary efforts to strengthen international diplomacy and cooperation between peoples.".

I contribute to this page: Read the Nobels and you can find all my blogs about Nobel Prize winning authors and their books here.
Posted by Marianne at 14:11