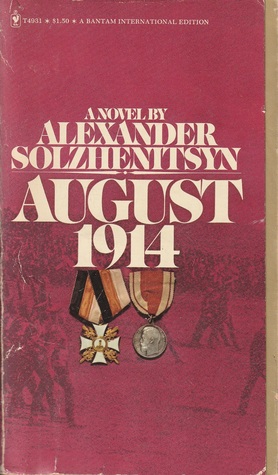 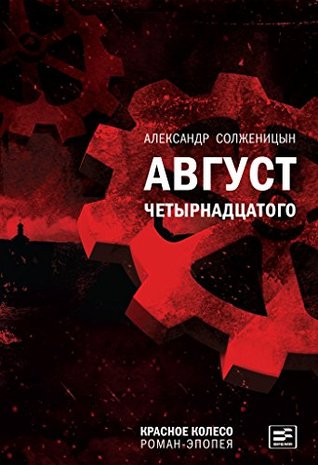 What an epic work! A tale of the First World War - or the Great War as it was called before the Second World War happened - from the Russian side. I have read a lot of books about WWI by authors from various countries: Austria, Belgium, Bosnia-Herzegovina, Canada, Egypt, France, Germany, Greece, Italy, the Netherlands, Serbia, the UK, the USA and even Russia (Doctor Zhivago) but never this explicitly about Russia, or even about the war itself, with the exception of "All Quiet on the Western Front").

Solzhenitsyn starts and ends with stories about the ordinary people, those that are left behind and who have to send their loved ones into battle and then tells us what happened just in one month, August 1914. One month of more than fifty.

He only focuses on one particular part, a small area in East Prussia that has been left by the German inhabitants and is now fought over by the Russians and Germans. Many mistakes occur, and in the end, the Germans win. 153.000 Germans and 191.000 Russians lose their lives.

As in "One Day in the Life of Ivan Denisovich" and many other stories, Solzhenitsyn brings us close to the characters, lets us hope and despair with them, lets us get angry about generals who take wrong decisions and cost the lives of so many soldiers.

This is just an excellent book about the battle of Tannenberg which was called just that because it was a revenge a battle the Germans had lost 500 years earlier. It really was the battle of Allenstein.

Not an easy read but if you would like to know more about WWI or battles in general, this is a great story.

What I also really appreciated about the presentation of the story, there is a map at the beginning of the book and a list of all the characters. The ones from real life in capital letters, the fictional ones in lowercase. Helps a lot, especially with a book with so much detail and so many characters.

"'The general concept of this novel,' the author has written, 'came to my mind in 1936, when I was just leaving secondary school. Since then I have never parted from it, regarding it as the chief artistic design of my life.' He has also said he considers the previous books he has published minor to this - 'a result of the oddities of my life story…'

August 1914, the first part of this major work, is set at the outbreak of the First World War, and its moral concern is to establish the responsibility for Russia’s defeat in the battle of Tannenberg. Limiting itself to the opening two weeks of the war, the novel describes the Russian offensive into East Prussia, which resulted in the encirclement and defeat of General Samsonov’s Second Army by Hindenburg. This disaster revealed the dry rot at the core of Tsarism and hastened its downfall.

The main theme is filled out by a great cross-section of characters, both fictitious and historic, from every walk of Russian life. The fictional character of Colonel Vorotyntsev, an enlightened and ironic young staff officer who mixes with the soldiers as much as with generals, provides a link between the various elements in the story. Solzhenitsyn gives a sympathetic portrait of Samsonov as the victim of staff blunders and personality clashes, and there is a moving description of his suicide in defeat.

August 1914 is a triumph of historical reconstruction as well as of the creative imagination. In the final chapter, it is clear that the guilty will escape through their influence at court, that Russia’s military humiliation is only a symptom of the deeper shame of the Tsarist system, and that a new Russia will somehow have to be born. The novel glows with the author’s love of his country and with his deep concern for ordinary men and women.

August 1914 is the first volume of Solzhenitsyn's epic, The Red Wheel; the second is November 1916. Each of the subsequent volumes will concentrate on another critical moment or 'knot,' in the history of the Revolution."

Aleksandr Solzhenitsyn received the Nobel Prize in Literature in 1970 "for the ethical force with which he has pursued the indispensable traditions of Russian literature".

I contribute to this page: Read the Nobels and you can find all my blogs about Nobel Prize winning authors and their books here.
Posted by Marianne at 11:23