Bryson, Bill "A Walk in the Woods" 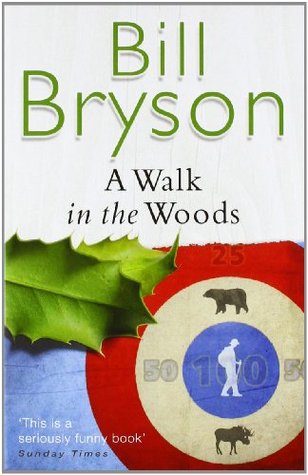 Bryson, Bill "A Walk in the Woods: Rediscovering America on the Appalachian Trail" - 1998

As one of the biggest Bill Bryson fans, I guess everyone is surprised that I never read "A Walk in the Woods" before. But I have not. I think he wrote so many books about the States that somehow this one was buried under that huge pile. And I'm not the biggest nature fan myself.

However, I ran out of good funny books and had to attempt this one. Especially since a good friend who loves the same kind of books as I do also just read and highly recommended it.

I was not disappointed. Same as in all his other travel books, Bill Bryson writes one of the funniest accounts of a mega-hike. Initially, he intends to walk the whole Appalachian trail but then he does take breaks. Still, he walks about 870 miles which amounts to only about a third of the whole trail. Well, I think he did a tremendous job. I know, I couldn't have done even a third of that, so kudos Mr. Bryson.

The story itself is hilarious, the author manages to describe everything in such a funny way that you cannot avoid laughing.

Warning: Do NOT attempt to read this in public if you don't want everyone looking at "that person who just can't stop laughing".  I mean it.

I have a blogpost called "Bill Bryson - Funniest Author ever" where I link to all my Bryson reviews.

From the back cover: "The longest continuous footpath in the world, the Appalachian Trail stretches along the East Coast of the United States, from Georgia to Maine, through some of the most arresting and celebrated landscapes in America.
At the age of forty-four, in the company of his friend Stephen Katz (last seen in the bestselling Neither Here nor There), Bill Bryson set off to hike through the vast tangled woods which have been frightening sensible people for three hundred years. Ahead lay almost 2,200 miles of remote mountain wilderness filled with bears, moose, bobcats, rattlesnakes, poisonous plants, disease-bearing tics, the occasional chuckling murderer and – perhaps most alarming of all – people whose favourite pastime is discussing the relative merits of the external-frame backpack.
Facing savage weather, merciless insects, unreliable maps and a fickle companion whose profoundest wish was to go to a motel and watch The X-Files, Bryson gamely struggled through the wilderness to achieve a lifetime’s ambition – not to die outdoors."
Posted by Marianne at 15:02