Birtwistle, Sue; Conklin, Susie "The Making of Pride and Prejudice" 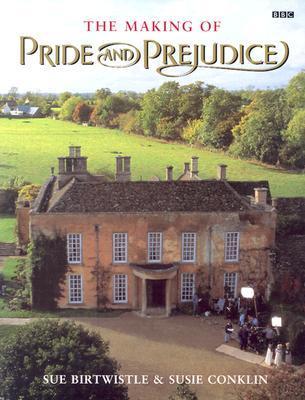 Birtwistle, Sue; Conklin, Susie "The Making of Pride and Prejudice" - 1995

If you're anything like me, you always want to know everything about a film or television series you watched, the location, the actors, the director, the costumes, anything worth knowing what goes on behind the scenes. Many DVDs nowadays offer an insight, you can often watch the film again with the director's comments, there are a lot of extras, interviews etc. It's almost like having been there yourself.

Now, I normally don't watch films of books that I've read, there is often far too much that's missing or - in my eyes - wrongly interpreted. But Jane Austen and other classic adaptations, I just can't resist. I will compare them and say, this one is better than that one, though.

In 1995, Andrew Davies wrote the screenplay and Simon Langton made this fabulous novel into a six-episode series. That's a time-frame where you can cover a lot of scenes. It still is my favourite adaptation of all the Jane Austen adaptations ever. (see here on IMDb)

This book, "The Making of P&P" shows us a large number of behind-the-scenes pictures and tells a lot about the series. In the introduction, Sue Birtwistle, the producer, reports about how the idea started and how the project evolved. Then they carry on with every little tidbit of information about the script, the production, costumes, the music and dancing, the filming, and there is a conversation with Colin Firth. We don't just learn about this particular series; we can also discover how television is made. Totally interesting.

The book also contains hundreds of wonderful photographs both from the series as well as from behind the scenes, and many, many funny episodes that happened. A wonderful book to read, look at and devour while or after watching "Pride & Prejudice".

"The Making of Pride and Prejudice reveals in compelling detail how Jane Austen's classic novel is transformed into a stunning television drama.

Filmed on location in Wiltshire and Derbyshire, Pride and Prejudice, with its lavish sets and distinguished cast, was scripted by award-winning dramatist Andrew Davies, who also adapted Middlemarch for BBC TV. Chronicling eighteen months of work - from the original concept to the first broadcast - The Making of Pride and Prejudice brings vividly to life the challenges and triumphs involved in every stage of production of this sumptuous television series.

Follow a typical day's filming, including the wholesale transformation of Lacock village into the minutely detailed setting of Jane Austen's Meryton.

Discover how Colin Firth approaches the part of Darcy, how actors' costumes and wigs are designed, how authentic dances are rehearsed and how Carl Davis recreates the period music and composes an original score.

Piece together the roles of many behind-the-scenes contributors to the series, from casting directors and researchers to experts in period cookery and gardening.

Including many full-colour photographs, interviews and lavish illustrations, The Making of Pride and Prejudice is an indispensable companion to the beautifully produced series and a fascinating insight into all aspects of a major television enterprise."
Posted by Marianne at 10:52