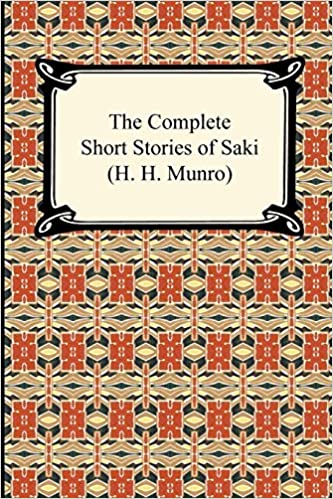 Our book club had decided to read the book "The Open Window and other short stories" by Hector Hugh Munro, or Saki, as he was known better. I couldn't find the book, so I bought one will all his short stories. These are the stories we were going to discuss:

I've mentioned it a lot of times before, short stories are not my thing and while I have read some books where I liked it, this was a little too much. Some of the short stories were great but they were over in no time. I couldn't get into them fast enough to really enjoy them.

There were stories that I liked and others that were a little OTT for me, too slapstick-y, if you know what I mean.

One of my favourite stories was the one that is mentioned in the title of the book we were supposed to read. "The Open Window". There is a short video that you can see here on YouTube to see what I mean.

Apparently, the author was influenced by by Oscar Wilde, Lewis Carroll and Rudyard Kipling and he influenced A. A. Milne, Noël Coward and P. G. Wodehouse. I can definitely see the comparison with P. G. Wodehouse whose collection "Right Ho, Jeeves" I read earlier this year. I can see the similarity but Wodehouse's sense of humour is so much better, that's why I enjoyed him so much more.

While reading the stories, I came to the conclusion that Saki disliked both women (in particular suffragettes) as well as children. When I searched whether he was married, I found out he was gay. That surprised me a little, he came across as quite the misogynist.

Would I read more of his short stories if he had written more? Probably not. Would I read a novel by him? I think I would.

Same as me, not everyone liked all of the stories. But those that we did like, the end twists were particularly hilarious.

Some favourites from those we discussed:
The Open Window
The Story-Teller
The Wolves of Cernogratz

Next to "The Open Window", my other favourite was "The Mouse" (from "Reginald in Russia"). That's the kind of humour I love.

We discussed this in our book club in April 2020.

"Hector Hugh Munro (1870-1916) was a British writer, whose witty works satirizing Edwardian society and culture led him to be known as a master of the short story. Munro, better recognized by the pen name Saki, produced works that contrasted the conventions and hypocrisies of Edwardian England with the uncomplicated and sometimes cruel state of nature, a conflict which the latter usually won. This complete edition of short stories will entertain readers with its wonderfully intricate characters, rich political satire and fine narrative style. The book begins with Saki's first works, the 'Reginald' stories, a small series of vignettes centered around the societal and cynical young Reginald. Also included are Saki's later and more popular story collections: 'Reginald in Russia,' the somewhat macabre tales of 'The Chronicles of Clovis', Saki's best known 'Beasts and Super-Beasts', 'The Toys of Peace', and 'The Square Egg.'"
Posted by Marianne at 12:20