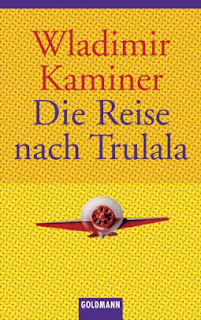 Honestly, I have no idea whether this book has been published in English or not. I have found the title "Travel to Trulala" which is an exact translation of the German original but I haven't found a cover picture.

Still, Wladimir Kaminer is on his way to become one of my absolute favourite "German" authors. He is originally Russian but has lived in Germany for ages and writes in German. And he is absolutely fabulous. He has been described as "part Bill Bryson" and I think that is a great description. His books are not generally travel books or even always non-fiction but this one is.

Wladimir Kaminer describes how he first comes to Germany and what his dreams are, where he wants to travel. While he doesn't really get very far (except for a trip to Denmark), he has plenty of friends who do that for him and who give him enough material for probably three more books.

Usually, the author tells us about life in Germany as a foreigner. Not this time. And, while this is technically a collection of short stories, it doesn't feel like it. The author has a great talent of going from one event to the next and linking it in a way that it belongs together.

If you can't get this book in English, there's always "Russian Disco" (German: Russendisko) which I read and reviewed a couple of years ago.

"Whether in the most remote corners of the world or in the streets of the metropolises, the unexpected lurks everywhere. And who can tell about it in a more rousing way than Wladimir Kaminer, who takes the reader on adventurous journeys to Siberia and Denmark, Moscow and Paris. And much of what he reports should be completely new even to experts ..."
Posted by Marianne at 10:44