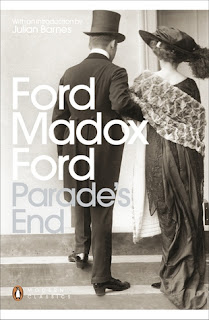 I have read a lot of books about WWI and WWII and most of them were great reads. I never know what to say when I read a book about a war and "enjoyed" it. Because, obviously, I don't enjoy reading about cruelty and death but I do prefer these kind of books to rose-tinted stories about love and similar stuff. I'm definitely not a chick-lit girl.

As this is a highly acclaimed book by "one of Britain's finest novelists", I was really looking forward to it. Also, it's huge, almost 1,000 pages, I usually love that.

I hardly ever skim through pages but I was very tempted to do it here. But I was afraid I would "get" the story even less if I did that. However, not skimming didn't help, either.

The only question I have now, there is a BBC miniseries. Should I try it or leave that, as well? I do like Benedict Cumberbatch (I mean, who doesn't?) but the story ...

"The Great War changes everything. In this epic tale, spanning over a decade, war turns the world of privileged, English aristocrat Christopher Tietjens upside down. It forces him to question everything he holds dear - social order, morality, marriage and loyalty. And it rocks the very foundations of English society.

This is a powerful story about love, betrayal and disillusionment in a time of horror and confusion by one of Britain’s finest novelists."

If you want to read good books about how the soldiers in WWI fared, check out
Faulks, Sebastian "Birdsong"
Malouf, David "Fly Away Peter"
Remarque, Erich Maria "All Quiet on the Western Front"

or any of the other books I reviewed in War: WWI.