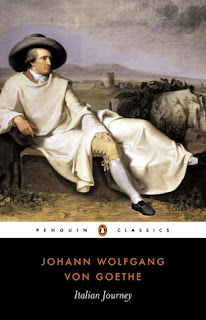 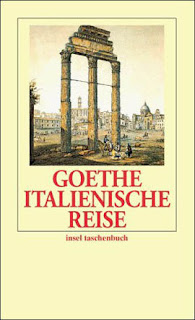 Goethe is considered one of the greatest thinkers in the world. He was not just a writer of novels, poetry and play, he was also a scientist and an artist. One of his most famous non-fictional publications is the "Theory on Colours", published in 1810, including his colour wheel and a very early study on the physiological effects of colour.

In his late thirties, he embarked on a trip to Italy, not a two week holiday like we are used to nowadays, no, he stayed for more than a year, travelled through the country and observed their culture and art.

In this book, he tells us all about his visits to the various parts of Italy, the museums and operas, his meeting the local population. Since not many people could travel at the time, it was something like a travel documentary you might watch on television today of a place you know you will never get to visit.

But he didn't just do a sightseeing tour, he also made botanical, mineralogical, geological and geographical researches and made quite a few discoveries, e.g. on the propagation of plants.

So, if any of this interests you, I can heartily recommend the book. After all, he was a perfect author and could tell stories in a way not many can. However, if you think the topic is too dry, I recommend other works by Goethe, e.g. "The Sorrows of Young Werther" (German: Die Leiden des jungen Werther).

But it is certainly worth reading Goethe. I hope he is as great in the translations as he is in German. In the "Country of Poets and Thinkers", he truly is one of the greatest. His thoughts are still as up to date as they were 200 years ago.

"In 1786, when he was already the acknowledged leader of the Sturm und Drang literary movement, Goethe set out on a journey to Italy to fulfil a personal and artistic quest and to find relief from his responsibilities and the agonies of unrequited love. As he travelled to Venice, Rome, Naples and Sicily he wrote many letters, which he later used as the basis for the Italian Journey. A journal full of fascinating observations on art and history, and the plants, landscape and the character of the local people he encountered, this is also a moving account of the psychological crisis from which Goethe emerged newly inspired to write the great works of his mature years."
The picture on the cover of the English book (Goethe in the Roman Campagna) was painted by his friend Johann Heinrich Wilhelm Tischbein whom Goethe visited in Rome during his travels. The picture is both the most famous one by Tischbein as well as the most famous one of Goethe.
Posted by Marianne at 11:33