This week, our topic is Comfort Reads (Share which books or kinds of books you turn to when you need to escape. You can either share specific titles if you love to re-read, or you could share qualities of books you look for in a comfort read.)

This was another tough subject for me. I like challenges, I love books that have more than 500 pages, I love classics, Nobel Prize Winners, Peace Prize Winners, anything that is not too easy. I can escape the real world best when I read about it. Weird, but there you are. And I've already done my favourite Nobel Prize Winning Books last year (see here). However, there are other prizes where I like to read the latest winners or some from former winners. I know many of you will disagree that these could be comfort reads. But yes, they often give me great comfort because I realize how well off I am.

None of these authors has received the Nobel Prize though I believe they would all be worthy of it. 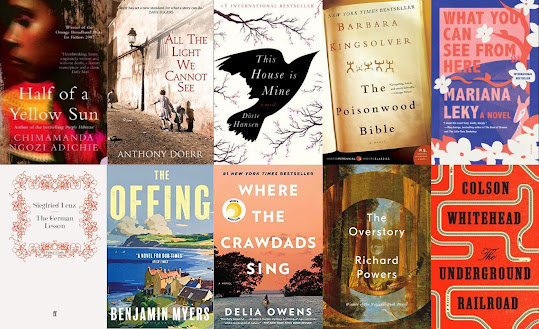 Adichie, Chimamanda Ngozi "Half of a Yellow Sun" - 2006 - Women's Prize for Fiction

Doerr, Anthony "All the Light We Cannot See" - 2014 - Pulitzer Prize for Fiction

Myers, Benjamin "The Offing" - 2019 - Favourite (German) Independent Books and The Times Book of the Year Award

As always, I'm really looking forward to the other comfort reads. I know we will all have a different view and share different books. I hope one or another will find one of my books interesting.