Rand, Ayn "We the Living" 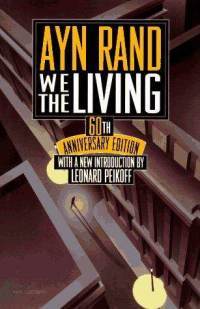 I found this book on one of those shelves where you can leave books you don't want any longer and others can donate something for a charity. I always liked Russian authors but I wasn't aware Ayn Rand was one. Had she used her real name, Alisa Zinovyevna Rosenbaum, I might have guessed it earlier.

According to her own words, "We the Living" is as near to an autobiography as she would ever write. I can see how she pulled a lot of the background information from her own experience. Of course, she made it to the States, so there's already a hint that this is not a biography. But it must have been much easier for her writing this novel after leaving Russia or the whatever it was called then. (Russian Soviet Federative Socialist Republic first, then USSR or Soviet Union).

This book is so great, so informative. Russia post-revolution in its early days when you had a lot of enthusiastic young people who thought they might make the world a better place to live for everyone. I can understand their dreams, I probably would have belonged to that group because I always believed that everyone should have the same chances. I still do. And I admire countries that achieved at least a little of that, similar wages, health insurance for everyone etc.

But back to Russia at the beginning of the last century. They certainly did not get what they wanted and for a lot of the enthusiastic new communists, the dreams were shattered quite quickly. Ayn Rand describes very well how they felt, and also what happened to the rest of them. If you'd owned something or belonged to the richer part of the people before the revolution, you had no rights whatsoever, couldn't study, couldn't work to earn a living, they just turned the tables around and left those people with nothing who had run the factories or the large farms etc. Not really such a good idea.

If you're interested in this time-frame, I highly recommend this novel. I will certainly read more of her books.

"Ayn Rand's first published novel, a timeless story that explores the struggles of the individual against the state in Soviet Russia.

First published in 1936, We the Living portrays the impact of the Russian Revolution on three human beings who demand the right to live their own lives and pursue their own happiness. It tells of a young woman’s passionate love, held like a fortress against the corrupting evil of a totalitarian state.

We the Living is not a story of politics, but of the men and women who have to struggle for existence behind the Red banners and slogans. It is a picture of what those slogans do to human beings. What happens to the defiant ones? What happens to those who succumb?

Against a vivid panorama of political revolution and personal revolt, Ayn Rand shows what the theory of socialism means in practice."
Posted by Marianne at 13:20