Christie, Agatha "And then there were none" 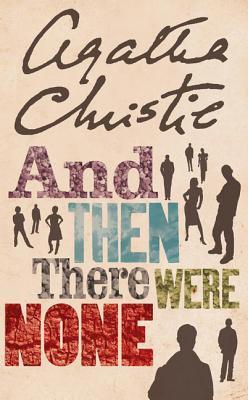 Christie, Agatha "And then there were none" (formerly: Ten Little Niggers) - 1939

I love Agatha Christie. But I usually just watch her on the television as I don't read many crime stories.

This one was different. Our online book club decided to postpone the chosen books and read some instead that are available on the internet. So, one of the choices was "And then there were none". I remember watching it in a local theatre where I knew half of the amateur actors personally. I remember it was great but I didn't remember the ending. Weird, because that happens to me very rarely. However, it was also reported by others that they had forgotten, maybe another great twist by the author?

Anyway, as with the tv adaptations, I thoroughly enjoyed this story. There was a lot of suspense in it, the characters were well written and you started to really like them. I couldn't imagine any of them being the "bad guy" (or girl), they all seemed so nice and had a good reason for the deed they were accused of. Yes, all of them supposedly had killed someone and therefore were lured onto the island in order to be killed.

I think we all know the nursery rhyme after which the book was named at first (there even was a German version and probably more in other languages, sometimes with a different title/different characters):

"Ten little Soldier Boys went out to dine;
One choked his little self and then there were nine.

Nine little Soldier Boys sat up very late;
One overslept himself and then there were eight.

Eight little Soldier Boys travelling in Devon;
One said he'd stay there and then there were seven.

Seven little Soldier Boys chopping up sticks;
One chopped himself in halves and then there were six.

Six little Soldier Boys playing with a hive;
A bumblebee stung one and then there were five.

Five little Soldier Boys going in for law;
One got in Chancery and then there were four.

Four little Soldier Boys going out to sea;
A red herring swallowed one and then there were three.

Three little Soldier Boys walking in the zoo;
A big bear hugged one and then there were two.

Two little Soldier Boys sitting in the sun;
One got frizzled up and then there was one.

One little Soldier Boy left all alone;
He went out and hanged himself and then there were none."

Apparently, at first the soldier boys were not soldier boys (check here) but I think it is a good idea to have changed that. A lot of translations still use the old title which I think is totally unacceptable, especially in this day and age. (Should have been back then but we know how things were. Unfortunately.)

It was quite nice to read this story. As usual with Agatha Christie's books, the ending is totally surprising. There are crime stories where you can try to guess who the criminal is. Hardly ever with Agatha. I have always been annoyed when some detail turns up in the end that changes the whole story. One cannot possibly know that.

However, I have watched all the Miss Marple and Monsieur Poirot (and some other) stories on TV in the meantime and probably should read a few of her books. At least this one was very good. Great mystery.

In the discussion, the plot was talked about and all the ways how the reader was being read into the story, characters and their crimes, motivations, archetypes. There seem to be also quite a few movies and series adaptations of the story, the new BBC one apparently being very much harsher and cruel. I will have to check into that.

We discussed this in our book club in May 2020.

"Ten strangers are invited to Soldier Island, an isolated rock off the Devon coast. Cut off from the mainland, with their generous host mysteriously absent, they are each accused of a terrible crime.
Then one of the party dies suddenly, and they realise there may be a murderer in their midst who might strike again…and again…

And all the time, copies of a macabre nursery rhyme hang in each room, a nursery rhyme with an omen of death for all ten of them."
Posted by Marianne at 13:06