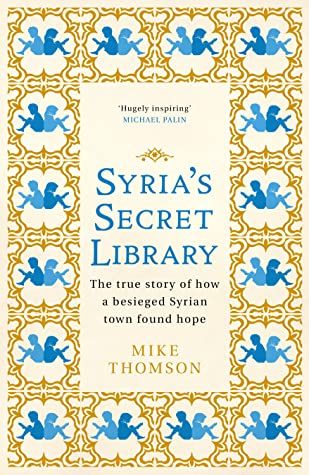 What an inspiring story, a monument of hope and love, a document of man's strength.

In the midst of one of the worst civil wars probably in history, some young men don't just think about themselves, how to survive, how to get food. No, they build a library in order to feed their souls and learn for the future "when all this is over". They are an inspiration to us all. The city was bombed, people were killed, nobody knew what happened to their loved ones. But the young guys collected books from the destroyed houses and made them available to everyone who wanted to get an education, who wanted to read.

I hope that all the people mentioned are still alive and haven't been killed wherever they are now. I would love to see a page by Mike Thomson where he gives us an update from time to time. I know he has tried to stay in touch with the young people and I think, most of us who have read the book, are just as interested in them as he is.

If this book shows us something, we really need books, in times of danger as well as in normal times. I hope future generation will learn from this and enjoy reading as much as I did and do, as I passed on to my children when they were little, a s a lot of my friends and family do.

A lot of books were mentioned, these are the ones whose titles I gathered. It gives us an idea that they read about everything.

Adonis = Ali Ahmad Said Esber "A Time Between Ashes and Roses
Abu Zahra, Muhammad "History of Religions"
Alhaj, Faisal bin Mohamad "The Tears of Men"
Al-Jisr, Nadim "A Marxist Interpretation of Islam"
Al-Jisr, Nadim "An Introduction to Islam"
Al-Jisr, Nadim "The Story of Faith"
Al-Masri, Maram "El va nue la Liberté"
Al-Nasr, Ahlam "The Blaze of Truth"
Al-Siba'i "This is What Life Taught Me"
Christie, Agatha "The Body in the Library"
Coelho, Paulo "The Alchemist"
Draz, Dr. Abdallah "Religion"
Giovanni, Janine di "The Morning They Came for Us: Dispatches from Syria"
Mansour, Ahmed "Under Fire in Afghanistan"
Qotob Abou, Muhammad " How to Reach Out to People"
Shakespeare, William "Hamlet"

Books where the author wasn't mentioned and I couldn't find them on the internet, probably not available as a translation.
"Historical Men"
"Mountains of Hope" written by a man from Daraya

"I think books are like rain. Wherever rain falls things grow. So hopefully where our books land, the person who reads them will gain knowledge, and his or her mind will grow." Anas Habib

"As I remember saying to you back in Daraya, just like the body needs food the soul needs books." Anas Habib

"We had a place of sanctuary, an oasis of calm and harmony in what seemed like a world gone mad. … It was another world, a world we shared together. And while outside was destruction and pain, inside was creation and hope. Despite all that was happening, I felt inspired inside those walls." Anas Habib

"The library gave birth to a movement of knowledge and learning, and enabled us to explore new things. It was also our sanctuary, and our minaret. It guided us through all the horrors, lit the path we should take and inspired us to carry on. It taught us that a fighter without knowledge is not a hero, but a gangster. The library's many books were fuel for our souls. They gave us back our lives. While bombs rained down from the skies, we discussed new ideas, learned from the past and planned for the future. The library united us all. It was an essential part of Daraya, and what it stood for. Looking back, the secret library was not only our saviour, it was our biggest weapon against the regime." Abdul Basit

"The secret library was filled with the wonderful aroma of old books and paper. It smelt of history, literature, philosophy, and culture. It was a deep, rich, comforting smell. It was like when you walk in the door of your home and are guided to the kitchen by the smell of fine food. That special dish, and all its delicious ingredients, are waiting there for you. To me, the library was like that. It gave us a precious space where we could breathe hope instead of despair. It liberated us from suffered and savagery. Inside its walls the love of science, literature and ideas filled the air. This symphony of books soothed our hearts. As we entered, its aura revived us, like fresh air to a suffocating man. It was the oxygen for our souls. It was a place where angels met. Each time I stepped inside, I flew with them." Abdul Basit

"Daraya lies on the fringe of Damascus, just south west of the Syrian Capital. Yet it lives in another world. Besieged by Syrian government forces since 2011, its people were deprived of food, bombarded by bombs and missiles, and shot at by snipers. Its buildings lay in ruins; office buildings, shops and family homes shattered by the constant shelling from government forces. But deep beneath this scene of frightening devastation lay a secret library.

No signs marked its presence. While the streets above echoed with rifle fire and shelling, the secret world below was a haven of peace and tranquillity. Books, long rows of them, lined almost every wall. Bloated volumes with grand leather covers. Tattered old tomes with barely readable spines. Pocket sized guides to Syrian poetry. Religious works with gaudy gold-lettering and no-nonsense reference books, all arranged in well-ordered lines. But this precious horde of books was not bought from publishers, book warehouses, or loaned by other libraries. Many people had risked their lives to save books from the devastation of war. Because to them, the secret library was a symbol of hope - of their determination to lead a meaningful existence and to rebuild their fractured society.

This is the story of an extraordinary place and the people who made it happen. It is also a book about human resilience and values. And through it all is threaded the very wonderful, universal love for books and the hope they can bring.
'Just like the body needs food the soul needs books.' Anas Habib"
Posted by Marianne at 12:34