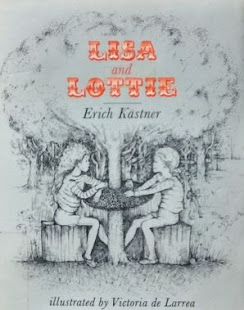 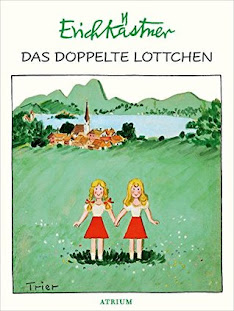 Lisa is a spoiled brat and lives with her single father in Vienna. When she is nine years old, she is sent to a summer camp in Northern Germany. There, she discovers that she seems to have a lookalike. Whilst at first she is so angry that the girls fight all the time, even though Lottie is a quiet girl, they soon discover that there is something wrong. Their birthday is the same day, Lottie only has a mother, so many things that are weird. They assume they are twins separated because the parents divorced. So, they decide to switch places, Lisa goes to Munich to stay with the mother as Lottie whereas Lottie takes on the role of Lisa in Vienna.

Sounds familiar? I guess almost everyone has watched a movie called "The Parent Trap" at one point or another. Either the one from 1961 with Hayley Mills who played both roles or from 1998 with Lindsey Lohan, also representing both twins. There are many more adaptations but these are probably the best known internationally. The German film from 1951 was the first to receive the German Film Award. The screenplay was written by Erich Kästner himself and if you know even a little German, try to watch the film (look here at IMDb), it's a lot better than both the American versions. And the twins are played by real twins.

This book (Double Lottie if you translate it literally) was already written in 1942 but since the pacifistic author was banned by the Nazis, it took a while until it was published.

Even then, it led to a lot of discussions. Divorce was not considered a good subject for a children's book and a single, successful working mother wasn't exactly the picture people wanted to see.

Erich Kästner was a very successful German author. This book is a little different from his other books as its main characters are girls and the mother is a strong woman.

I read this book when I was quite young and really loved it. I re-read it when my kids were young. It doesn't matter how old you are and whether you have children or not. It is a great book to read.

"Imagine what a surprise it would be to discover you are a twin, and you never knew it! This is just what happened to Lisa of Vienna and Lottie of Munich when they met at summer camp.

The shock of meeting was followed by many pleasant hours while the girls got to know each other and exchanged stories about Father and Mother. And then the nine-year-olds decided on a daring plan - they would switch places and hope to find a way to bring their parents back together!"
Posted by Marianne at 10:33