This week's topic is: Bookish Wishes

(Jana's birthday is today, so she's celebrating it by granting the wishes of  her friends! Apparently, this is a popular thing to do on Twitter, but today we’re blog hopping. List the top 10 books you’d love to own.)

Interesting subject. I had to think for a while which book I'd like to own. The thing is, I often have to buy the books because I can't get them in the library, so I own most of my favourite books. That doesn't mean there aren't books I'd like. But most of them were on my Christmas wishlist (Top Ten Books I Hope Santa Brings).

They are still all valid except for "The Truths We Hold" (present from my son) and "A Promised Land" (I found a used copy).

So, I had to twist the topic (again) and thought Books I would love to read again for the first time might be a good replacement. 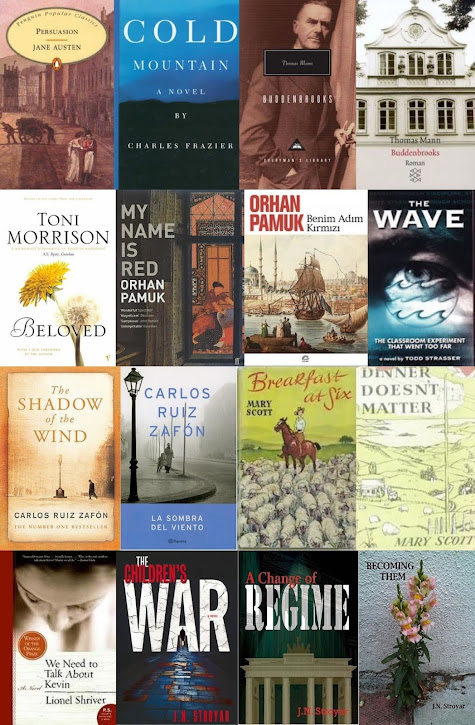 Having said that, I wouldn't mind having first editions of those books (preferably signed by the author 😉) or some beautiful ones.

Austen, Jane "Persuasion" - 1817
Wouldn't mind rereading all of her books for the first time but especially this one.

Frazier, Charles "Cold Mountain" - 1997
I have reread this book several times but it would be lovely to experience it again for the very first time.

Mann, Thomas "Buddenbrooks: The Decline of a Family" (German: Buddenbrooks) - 1901
My favourite German book of all time, probably the reason why I got into classics.

Morrison, Toni "Beloved" - 1987
My first book by Toni Morrison, probably the one that left the largest impact.

Pamuk, Orhan "My Name is Red" (Turkish: Benim Adim Kirmizi) - 1998
This book introduced me to one of my favourite authors ever and I have read most of his books now.

Rhue, Morton "The Wave" - 1981
Of course, I could read this book (like all the others) again and again but I know the end and that changes the whole experience.

Ruiz Zafón, Carlos "The Shadow of the Wind" (Spanish: La Sombra del Viento) - 2001
And his whole Cemetery of Forgotten Books series. Or any of his books.

Stroyar, J.N. "The Children's War" and "A Change of Regime" plus "Becoming Them"
Such a great story, good to be re-read but there is so much that you see coming once you know the story, wouldn't mind reading it again for the first time.
Posted by Marianne at 10:36