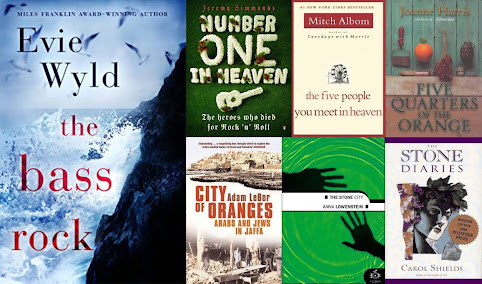 #6Degrees of Separation:
from The Base Rock (Goodreads) to The Stone Diaries

This month's prompt starts with The Bass Rock by Evie Wyld, the winner of the Stella Prize 2021.

As usual, I haven't read the book. Neither have I read anything by the author or ever heard of her. I thought about either starting with a book that takes in Scotland or one with three women but in the end, I went with the words in the title. It's interesting how the same word in a title often leads you to a completely different books.

Rock
Simmonds, Jeremy "Number One in Heaven - The heroes who died for Rock 'n' Roll" - 2006
A non-fiction book with facts on all those Rock & Pop icons that have left us far too early due to an untimely death.

Heaven
Albom, Mitch "The Five People You Meet in Heaven" - 2003
An idea about the meaning of life.

Five
Harris, Joanne "Five Quarters of the Orange" - 2001
A family trying to come to terms with their past, their behaviour in WWII.

Orange
LeBor, Adam "City of Oranges. An Intimate History of Arabs and Jews in Jaffa" - 2006
Another non-fiction book about the life in Jaffa before and after the declaration of the state of Israel and how much has changed for its inhabitants.

City
Löwenstein, Anna "The Stone City" (Esperanto: La Ŝtona Urbo) - 1999
Originally written in Esperanto (and translated into English by the author herself), this novel is a good information about life in the first century both in Britain and in Rome, life in freedom and life as a slave.

Stone
Shields, Carol "The Stone Diaries" - 1993
Another novel about the life of a woman born at the beginning of the last century.

And there I've wandered from rock to stone. Not such a long journey this time. 😉