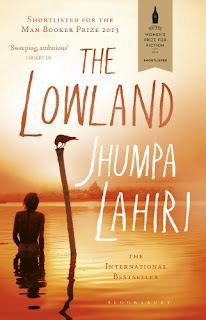 I've read a few books by Jhumpa Lahiri and I've had this on my TBR pile for a while. I have no idea why it took me so long to start it. Oh, wait a minute, must be those hundreds of other books on that shelf. LOL

Whilst I have read many books about India, and quite a few about the independence (e.g. Midnight's Children by Salman Rushdie) and the fight for it, I didn't know much about the Naxalites, just a general knowledge that they existed. In this book, we get acquainted with the organisation and its followers. And the story also touches the reason why Indians would leave their country plus the role of women in society back then, both in India as well as in the USA.

I knew it was a violent time but it's different when you hear about individuals and how they fared under certain circumstances, even if they are fictitious. Since I always like to research the background of my books, especially if they are historical ones, I learned that the group still exists and there are still many conflicts with them and numerous people are killed every year. We hardly ever hear about that in the rest of the world. What a shame!

And then there is also a "next generation" in the book and all the implications that arise from growing up in a country where your parents weren't born.

I found this novel extremely interesting and well written.

"The Lowland is an engrossing family saga steeped in history: the story of two very different brothers bound by tragedy; a fiercely brilliant woman haunted by her past; a country torn by revolution. A powerful new novel - set in both India and America - that explores the price of idealism and a love that can last long past death.

Growing up in Calcutta, born just fifteen months apart, Subhash and Udayan Mitra are inseparable brothers, one often mistaken for the other. But they are also opposites, with gravely different futures ahead of them.

From Subhash's earliest memories, at every point, his brother was there. In the suburban streets of Calcutta where they wandered before dusk and in the hyacinth-strewn ponds where they played for hours on end, Udayan was always in his older brother's sight. So close in age, they were inseparable in childhood and yet, as the years pass - as U.S tanks roll into Vietnam and riots sweep across India - their brotherly bond can do nothing to forestall the tragedy that will upend their lives.

Udayan - charismatic and impulsive - finds himself drawn to the Naxalite movement, a rebellion waged to eradicate inequity and poverty. He will give everything, risk all, for what he believes, and in doing so will transform the futures of those dearest to him: his newly married, pregnant wife, his brother and their parents. For all of them, the repercussions of his actions will reverberate across continents and seep through the generations that follow.

Epic in its canvas and intimate in its portrayal of lives undone and forged anew, The Lowland is a deeply felt novel of family ties that entangle and fray in ways unforeseen and unrevealed, of ties that ineluctably define who we are. With all the hallmarks of Jhumpa Lahiri's achingly poignant, exquisitely empathetic story-telling, this is her most devastating work of fiction to date."