This week's topic is: Books I Loved that Made Me Want More Books Like Them
(Jana thinks the wording is weird here, so if you have a better way to say this please let me know! What I’m thinking is… you read a book and immediately wanted more just like it, perhaps in the same genre, about the same topic or theme, by the same author, etc. For example, I once read a medical romance and then went to find more because it was so good. The same thing happened to me with pirate historical romances and romantic suspense.) 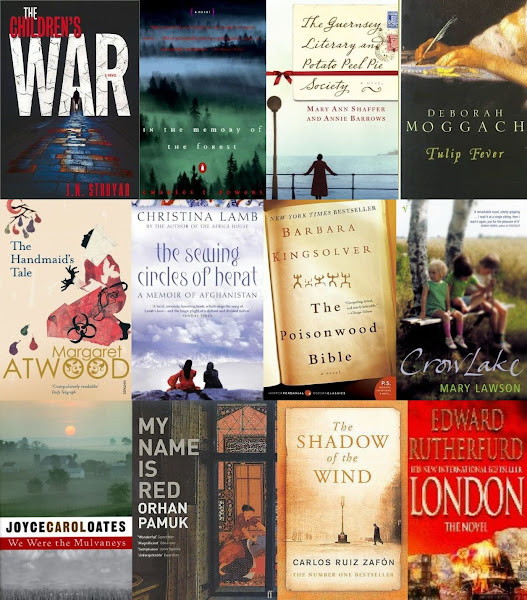 Then there are the books where you know already when you start it that the author passed away after writing their very first book.
Shaffer, Mary Ann & Barrows, Annie "The Guernsey Literary & Potato Peel Society" - 2008
Powers, Charles T. "In the Memory of the Forest" - 1997

Or there are some where you find many other books on the same subject. We read a book about Tulipomania in the Netherlands in the book club. I found it really fascinating and have read quite a few more novels and non-fiction books about it since then.
Moggach, Deborah "Tulip Fever" - 1999
Dash, Mike "Tulipomania: The Story of the World’s Most Coveted Flower and the Extraordinary Passions It Aroused" - 2000
Pavord, Anna "The Tulip" - 2004
Laker, Rosalind "The Golden Tulip" - 1989
Marini, Lorenzo "The Man of the Tulips" (Italian: L'uomo dei tulipani) - 2002

It's often book club books that lead me to discover whole new genres.
Atwood, Margaret "The Handmaid's Tale" / "The Handmaid's Tale" - 1985
Dystopian novels, some of my favourites.
Lamb, Christina "The Sewing Circles of Herat: A Personal Voyage Through Afghanistan" - 2002
Everything about Afghanistan.
Kingsolver, Barbara "The Poisonwood Bible" - 1988
Barbara Kingsolver has become one of my favourite authors after we read this one in the book club.
Lawson, Mary "Crow Lake" - 2002
And the same goes for Mary Lawson. Unfortunately, she has not written as much.

Or authors where I start one book and end up reading all of their works:
Oates, Joyce Carol "We Were the Mulvaneys" - 1996
Pamuk, Orhan "My Name is Red" (Turkish: Benim Adim Kirmizi) - 1998
Ruiz Zafón, Carlos "The Shadow of the Wind" (Spanish: La Sombra del Viento) - 2001
Rutherfurd, Edward "London - The Novel" - 1997
All of them belong to my all-time favourites now.

I could have found lots of others but I wanted to put together a wide variety of literature so there is at least one idea for everyone.
Posted by Marianne at 10:56