Happy July to all my friends and readers 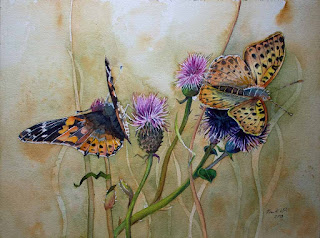 I love thistles. The blossoms are beautiful. And the artist has managed to portray both the flowers and the butterflies so well, don't you think?

The official name for the month in Low German is "Haimaond" which is easy to translate into English because it's "Hay Month". I guess the reason for that is self-explanatory. In English, we have the idiom "Make hay while the sun shines" which in German we "translate" into "forge the iron while it's hot". Maybe it says something about our countries why we have that different kind of proverbs but they both mean the same, do what you can while you can, take advantage of your chances, don't let them go by. Both good advice. Try that during non-lockdown.

Since in Germany, June and July both sound the same over the phone, Juni and Juli, we often pronounce it differently: Juno ['ju:no] and Julei ['ju:lai] (so almost like the English July, at least at the end).

There are no national holidays in July in Germany but in most states, the summer holidays begin at some point. We stagger the beginning of all holidays because otherwise, the streets would be even fuller than now with everyone going on holidays when the kids are out of school. We can't take them out of school in Germany for any other reason than an illness or something serious, like a funeral in the family or so.

But there are a few very famous national holidays this month in other countries, starting with Canada on the 1st, then followed by the USA on the 4th , and - of course - France on the 14th and Belgium on the 21st. Of course, there are many others but these are the countries where I know people.
So, happy Canada Day, Independence Day, Bastille Day (Quatorze Juillet) and National Day!
* * *

There is a British one about Saint Swithun's day (July 15): St. Swithun's day, if thou dost rain, For forty days it will remain; St. Swithun's day, if thou be fair, For forty days 'twill rain na mair. Apparently, the meteorological explanation for this is that the jet stream has a pattern that holds the weather pretty steady in most years. If it lies north of the British Iles, the high pressure from the continent can move in, when it lies south of them, the weather comes in from the Atlantic and the Arctic. So, a lot of the old predictions can be confirmed today, interesting.

Have a happy July with this beautiful watercolour painting by Frank Koebsch. Enjoy the summer while you can, while Corona gives us some reprieve, but don't overdo it so we can hopefully avoid a new lockdown. To my friends in the Southern hemisphere, who just go through a rougher patch, stay safe!


You can find many more wonderful pictures on their website here.

You can also have a look under my labels Artist: Frank Koebsch and Artist: Hanka Koebsch where you can find all my posts about them.
Posted by Marianne at 11:06