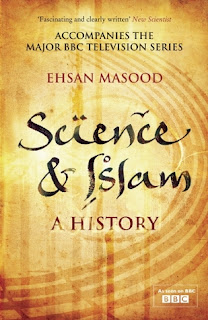 I had never heard of the BBC TV series "Science & Islam" but I thought the book sounded interesting. And it was. Very much so. We always hear about the Greek scholars, the Italians, the other Europeans who came afterwards but we are never told that a lot of their discoveries were started by scientists in another part of the world had found long before them, that they were not just encouraged but also supported by the Islamic world.

As a non-scientist, I often find it hard to understand books about science. Not that I'm not that interested, my mind just goes another way. This one was different, it was written for people like me who might want to hear about the topic but usually blend out after the first paragraph because it goes over our heads.

And if you're interested, you can also learn a little about the history of Islam, the geography of that area since the author included it if necessary for the chapter.

I really enjoyed reading this book. I had it on my TBR pile for a while and brought it out for my Xanadu read in July with the topic "Science".

Quote:
"Knowledge has no borders, wisdom has no race or nationality. To block out ideas is to block out the kingdom of God." Aristotle
Something, we all should keep in mind.

"Long before the European Enlightenment, scholars and researchers working from Samarkand in modern-day Uzbekistan to Cordoba in Spain advanced our knowledge of astronomy, chemistry, engineering, mathematics, medicine and philosophy.

From Musa al-Khwarizmi, who developed algebra in ninth-century Baghdad, to al-Jazari, a 13th-century Turkish engineer whose achievements include the crank, the camshaft and the reciprocating piston, Ehsan Masood tells the amazing story of one of history’s most misunderstood yet rich and fertile periods in science, via the scholars, research, and science of the Islamic empires of the Middle Ages: the extraordinary Islamic scientific revolution between 700 and 1400CE."

"Today it is little acknowledged that the medieval Islamic world paved the foundations for modern science and the scientific institutions that now form part of our everyday world. The author provides an enlightening and in-depth exploration into an empire's golden age, its downfall and the numerous debates that now surround it."

"History's least-known yet most fertile period in science was the extraordinary Islamic scientific revolution between 700 and 1400. The story of the scientists and inventors is woven into a journey through the Islamic empires of the middle ages that enabled this revolution, and its contribution to science in Western culture."