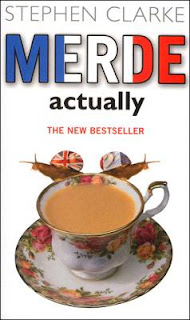 After reading "A Year in the Merde", I was sure I'd want to read more of his books (as mentioned in my review).

So, this one made it onto my TBR pile and since it sas "Paris in July" month, I had to read it now.

Paul West, the author's alter ego, I suppose, is still in Paris and has opened a British tea room. He struggles with the French authorities who don't accept anything not precisely written in French and with French girls, their families and the French in general. He picks on everyone, though, his English compatriots as well as any kind of tourists he comes across in his tearoom. Still quite funny, not as hilarious as the first one but a good sequel.

Again, a nice book to read as an expat but also for those who love to travel or France. The Times said he is "edgier than Bryson, hits harder than Mayle". While I agree with the latter, nobody can beat Bill Bryson, he is the best travel writer there is.

"A year after arriving in France, Englishman Paul West is still struggling with some fundamental questions:

What is the best way to scare a gendarme? Why do French job applicants put sexually transmitted diseases on their CVs? Why are there no public health warnings on French nudist beaches? And how do you cope with a plague of courgettes?

Paul also mutates (temporarily) into a Parisian waiter, samples the pleasures of typically French hotel-room afternoons, and on a return visit to the United Kingdom, sees the full horror of a British office party through Parisian eyes. Meanwhile, he continues his search for the perfect French mademoiselle. But will Paul find l'amour eternel, or will it all end in merde?"

Stephen Clarke has written more sequels to this story in the meantime (in addition to the ones I mentioned in my other review):

I think I will have to get at least one of them for next year's "Paris in July".