Happy August to all my friends and readers 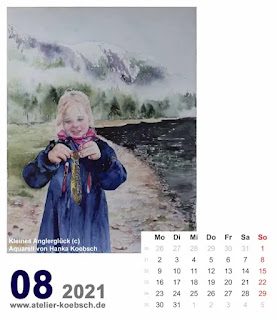 Look at the happy face of this little girl who caught a fish, quite big for her size, I think. Isn't it cute?

* * *
The Low German name for August ist "Arntemaond", the English translation is "Harvest Moon". Now, it might seem a little early to speak of harvest in some regions but not here. You see tractors driving around all day carrying the fruit of their fields to the barns.

* * *
No national holidays in Germany in August but summer holidays almost everywhere. Since Germany has 16 states (Länder) including 3 city states, the can't all start and end their holidays at the same time. The motorways are too full as it is. So, they have divided the country into five groups that always have the same holidays:

They last between six and seven weeks and start in the middle of June (earliest) and end middle of September (latest). Every state determines how long certain holidays are, so some have longer Easter holidays and shorter holidays in the autumn or some have holidays at Pentecost and the other holidays are shorter.
The states alternate with their time except for group V since Bavaria has holidays at Pentecost and the time between the two would be too short if they alternated. But the Bavarians always have to have an exception.

Stellt im August sich Regen ein, so regnet's Honig und guten Wein.
If it rains in August, it rains honey and good wine.
Hitze an St. Dominikus – ein strenger Winter kommen muss.
Heat on St. Dominic - a severe winter must come.
(That would be the 8th of August)

* * *
We've had changing weather in Germany last month. Hot days interchanged with rainy ones. But our weather was halfway normal compared to further South. You certainly all heard about the terrible floods in Germany, the Netherlands, Belgium and Austria. We never had weather like that. I hope more people understand that we have to act against climate change.
Now!!! It might be too late already.

Corona has abated a little in Germany so we could go to some restaurants and other places. However, it's not good in some other countries, so there still was no way we could visit our sons in the Netherlands and Belgium without any danger and major complications. Hopefully soon.

* * *
Have a happy August with this beautiful watercolour painting by Hanka Koebsch. I wish you no Corona, no floods, no other catastrophes.
Just a lovely month.

You can find many more wonderful pictures on their website here.

You can also have a look under my labels Artist: Frank Koebsch and Artist: Hanka Koebsch where you can find all my posts about them.
Posted by Marianne at 12:36