Six Degrees of Separation ~ Postcards from the Edge 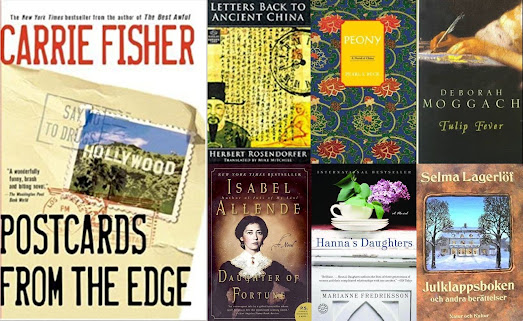 #6Degrees of Separation:
from Postcards from the Edge (Goodreads) to Sancta Lucia

This month's prompt starts with Postcards from the Edge (Goodreads) by Carrie Fisher.

Postcards made me think of letters.

A man from China made his way through a time machine, he travelled a thousand years and is more than surprised about everything he sees. He knows no cars, no telephone, no buildings that go over one storey high.

This made me think of the first book I read about China. It wasn't a thousand years ago but it might as well because that world is very different from ours.

Peony is a young servant (almost a slave) in a rich Chinese Jewish household. Her love to the son of the family cannot result in anything as traditional rules don't allow a marriage between them.

Peonies are my favourite flowers and therefore, I go further with a flower that is very popular in the last country I lived in, the tulip.

Tulips meant a lot to the people of the 17th century in Holland and Flanders. Some bulbs would yield the price of a house in the most expensive quarter of Amsterdam.

Of course, there are other kinds of fever, the illness kind but also something we can compare to the tulip fever, the gold fever.

This part of the "Del Valle" trilogy is situated mostly in the United States, especially California, and talks about different cultures getting together at around the time of the gold rush.

One of my favourite books about daughters is by a name sister:

A remarkable story about the life of women and how it changed during the last century. The story is situated in Sweden but it could have happened anywhere in Europe.

Thinking about Sweden, I often think about winter, Christmas and their feast of Santa Lucia, so I had to think about this book by Selma Lagerlöf, the first woman who received the Nobel Prize for literature.