This week's topic is: Fictional Crushes

I don't often have crushes, never was the type of person to be blown away by someone's good looks. It was more the type of person someone was. And there are a few men in literature that I admire (probably fewer than women but I don't want to get too far away from the subject), I call them my personal heroes, so that's what I'm going to present today. 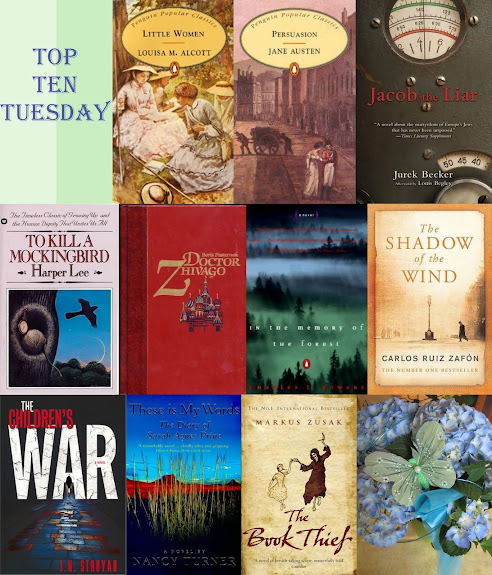 Alcott, Louisa May "Little Women" - 1868
Theodore "Laurie/Teddy" Laurence, I never understood why Jo March didn't want to marry him, he is such a lovely guy.

Lee, Harper "To Kill a Mockingbird" - 1960
Atticus Finch, of course. What a wonderful guy who stands up for the little man even if it is to his disadvantage.

Pasternak, Boris "Doctor Zhivago" (Russian: Доктор Живаго = Doktor Živago) - 1957
Of all the main and secondary characters of all the books I read, Jurij Zhivago was always one of my favourites. Though, that might have been the lovely Omar Sharif who played him in one of my favourite movies ever. 😉 (So, you could count this as a crush)

Powers, Charles T. "In the Memory of the Forest" - 1997
Leszek Maleszewski tries to discover the reason for his friend's murder and therefoy uncovers the history of his village.

Ruiz Zafón, Carlos "The Shadow of the Wind" (Spanish: La Sombra del Viento) - 2001
(El cementerio de los libros olvidados #1)
Juan Sempere is the guy who introduces his son Daniel to the Cemetery of Lost Books and us to a wonderful tetralogy of books about it.

Stroyar, J.N. "The Children’s War" - 2001
Peter Halifax is the kind of guy youd would want by your side if you are in trouble.

Zusak, Markus "The Book Thief" - 2005
Hans Hubermann, Liesel Meminger's foster father. He raises the little orphan girl as if she were is own, is very sympathetic and courageous, has the heart in the right place.
Posted by Marianne at 09:44