Frost, Robert "A Boy’s Will" and "North of Boston" 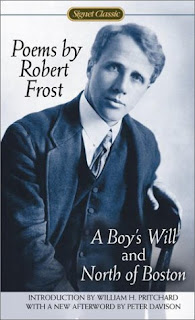 I've mentioned it a couple of times that poetry is not my thing. But this ended up on my TBR pile for some reason, probably the gift of someone moving who didn't want to take it along and so it was among my classic books that I listed on my classics club list. And then it was chosen for our latest classics spin where a number is drawn and we read that book from our list that carries this number.

I had only recently read Pablo Neruda's "The Captain's Verses" for my book club and hadn't intended to read another poetry collection for a while but well, I thought it was meant to be and started reading. Since I really get bored with any poem after a while, I tried to read it in very small pieces but that didn't change anything.

The only "poem" I could relate to was almost a short story, "The Death of the Hired Man" which you can read here on the page of the Poetry Foundation.

To be honest, most of the other poems made no sense to me and no matter how hard I tried to understand what the author wanted to tell us by it, I didn't get it. I guess, let those who like poetry enjoy them and let me stay with my chunky books.

"The publication of A Boy’s Will (1913) and North of Boston (1914) marked the debut of Robert Frost as a major talent and established him as the true poetic voice of New England. Four of his volumes would win the Pulitzer Prize before his death in 1963, and his body of work has since become an integral part of the American national heritage.

This is the only edition to present these two classics in their original form. A Boy’s Will introduced readers to Frost’s unmistakable poetic voice, and in North of Boston, we find two of his most famous poems, 'Mending Wall' and 'The Death of the Hired Man.' With an introduction by distinguished critic and Amherst College professor William H. Pritchard, and afterword by poet and critic Peter Davidson, and carefully selected bibliography, this edition stands as a complete and vital introduction to the work of the quintessential modern American poet."

Another well-known poem by him, probably the best known is "The Road Not Taken" which is here on the Poetry Foundation page.