This week's topic is: Secondary/Minor Characters Who Deserve More Love 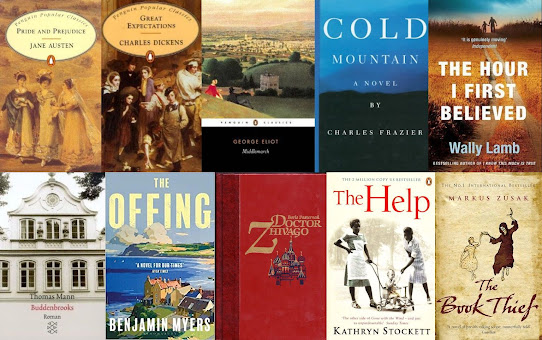 Mary Bennett, the middle Bennett sister. She gets neglected all the time, the father prefers the two older sisters (the only sensible ones), the mother the younger ones.
Austen, Jane "Pride & Prejudice" - 1813

Georgiana Maria Gargery, Pip's sister, who takes him in after the parents died. That might have been more common in those days since a lot of people died young and left young children but they also ended often in an orphanage.
Dickens, Charles "Great Expectations" - 1861

Celia Brooke, Dorothea's younger sister. She marries Sir James even though he loves her sister first but I think they lead a happy life.
Eliot, George "Middlemarch" - 1871-72

Ruby Thewes. Without Ruby, Ada would not have survived. She is the sensible person who rescues the heroine of the story.
Frazier, Charles "Cold Mountain" - 1997

Maureen Quirk survives a shooting in her school and has to live with the aftermath. She cannot forget this for the rest of her life.
Lamb, Wally "The Hour I First Believed" - 2008

Gerda Buddenbrook née Arnoldsen. She marries Thomas, the son of the Buddenbrook family. He is not happy with his destiny and cannot live the life his ancestors have bestowed on him. I would like to see her view of this life.
Mann, Thomas "Buddenbrooks: The Decline of a Family" (German: Buddenbrooks) - 1901

Dulcie Piper, the nice lady who offers Robert Appleyard, the protagonist, not just a roof over his head for a while but a new outlook on life. We should all have a Dulcie in our lives.
Myers, Benjamin "The Offing" - 2019

Tonya Gromeko Zhivago. Well, the main characters in this novel is, of course, Yuri Zivago. We learn a lot about him, his life, the love of his life, Lara. But what about his wife, Tonya, with whom he grows up, who is like a sister to him for many years and then becomes his wife. We don't hear that much about her, I would love to know her better.
Pasternak, Boris "Doctor Zhivago" (Russian: Доктор Живаго = Doktor Živago) - 1957

Minny Jackson, one of the maids in this story, THE maid in this story. I would love to have her courage. And to have a friend like Minny.
Stockett, Kathryn "The Help" - 2009

Hans Hubermann, the only guy in my list. He is the foster father of Liesel Meminger and there should be more stories about heroic people like him.
Zusak, Markus "The Book Thief" - 2005