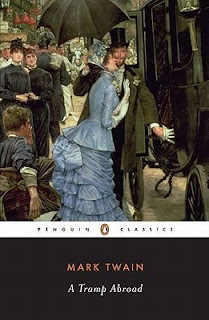 I have often remarked how much I love Bill Bryson, specifically his travel books. I was told by a few people that I ought to read those of Mark Twain about his travels to Europe. So I did. Five years ago, I read "The Innocents Abroad" and found that it wasn't just the most boring book ever but also a very racist one. I was then told that "A Tramp Abroad" was a lot better. Okay, I gave him another chance.

Maybe I didn't like his judgment about Europe but even more, I think, I didn't like the way he portrayed the American tourist. And, again,  I couldn't find any humour in his writing.

I didn't find this book as racist as his first one (though that is still no excuse for some of the diatribes) but he was still rambling on and on, mostly about nothing at all. Boring, boring, boring. I guess this will be my last book by Mark Twain, unless I'll reread "Tom Sawyer" and "Huckleberry Finn" again one day with my grandchildren, if ever I should have any.

"Twain's account of traveling in Europe, A Tramp Abroad sparkles with the author's shrewd observations and highly opinionated comments on Old World culture, and showcases his unparalleled ability to integrate humorous sketches, autobiographical tidbits, and historical anecdotes in a consistently entertaining narrative. Cast in the form of a burlesque walking tour through Germany, Switzerland, France, and Italy, A Tramp Abroad includes among its adventures a voyage by raft down the Neckar and an ascent of Mont Blanc by telescope, as well as the author's attempts to study art - a wholly imagined activity Twain 'authenticated' with his own wonderfully primitive pictures in this volume."