This week's topic is: Favourite Places to Read

I know I've done these kinds of lists before and it's always the same, so I thought I'd rather go back to a list of books, this time with places, so
Cities in the Title

I first went and chose titles from Nobel Prize or German Peace Prize winners where I found quite a few, then I checked my list of Pulitzer, Booker and other prize winners where I didn't find any, so I thought I'll see whether there are other authors or books that deserve prizes. 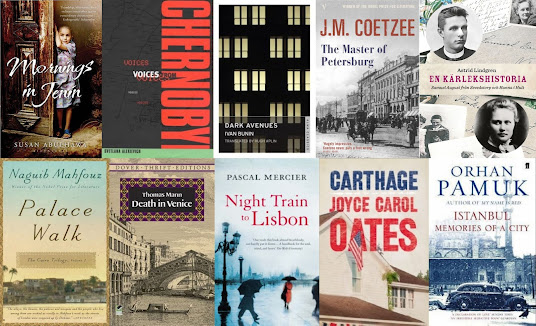 Abulhawa, Susan "Mornings in Jenin" - 2010 (this author contributes to the understanding of Palestinians, she could get the Nobel Peace Prize)

Oates, Joyce Carol "Carthage" - 2014 (my suggestion for the next Nobel Prize winner)

I contribute to this page: Read the Nobels and you can find all my blogs about Nobel Prize winning authors and their books here.
Posted by Marianne at 10:52