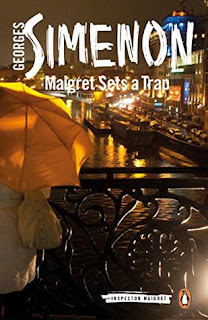 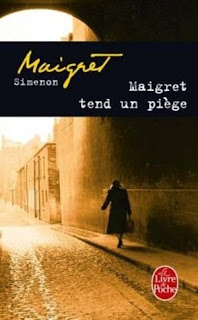 Even though I am not a reader of crime novels, I bought this book last year after I had watched the new adaptation with Rowan Atkinson. If you like to watch crime stories, I can hartily recommend the Maigret series. Unfortunately, he only did four but I hope there will be more. And now it fits in the challenge Paris in July.

Anyway, this was the first book I read by Georges Simenon and I really liked it. The way he builds suspense, the way he presents his characters, he has an interesting way of presenting his story. He tries to make Maigret (and thereby us) understand the thoughts and reasons of the murderer. Totally interesting.

"With a serial killer on the loose in Paris, Maigret must outsmart the killer before he can strike again. The inspiration for ITV's feature-length adaptation starring Rowan Atkinson and the forty-eighth book in the new Penguin Maigret series.

Detective Chief Inspector Maigret is known for his infallible instinct, for getting at the truth no matter how complex the case. But when someone starts killing women on the streets of Montmartre, leaving nary a clue and the city’s police force at a loss, he finds himself confounded. In the sweltering Paris summer heat, with the terrified city in a state of siege, Maigret hatches a plan to lure the murderer out."