This week's topic is: Book Titles That are Questions

I always think it interesting how many different books fall under one category. But this one was a really funny one. I have non-fiction books as well as science fiction, children's books and novels, classics and new publications, serious and funny ones. So, I'm sure there is a book here for everyone. 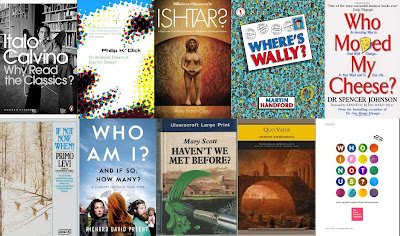 Some of the questions are not as important as others. I don't really care what androids dream about or even where Waldo is though I always had a lot of fun looking for him with my boys. Other questions don't sound important, like do I want to know who moved my cheese or simply find it again. Well, for me the answer would be neither since I'm lactose intolerant. But the book is very philosopical, same as "Who am I and if so, how many?" and "If not now, when?" And any reader might like the answer to "Why read the classics?" Another important question is asked by the young generation, "Who, if not us?" And a very personal story is told in "Whatever happened to Ishtar?" The books "Haven't we met before?" and "Quo vadis?" are more for entertainment, though the latter is a nice historical novel.

Frandi-Coory, Anne "Whatever Happened to Ishtar?: A Passionate Quest To Find Answers For Generations Of Defeated Mothers" A Journey Through Your Mind" - 2010

Precht, Richard David "Who Am I and If So, How Many?: A Journey Through Your Mind" (German: Wer bin ich und wenn ja, wie viele? Eine philosophische Reise) - 2007