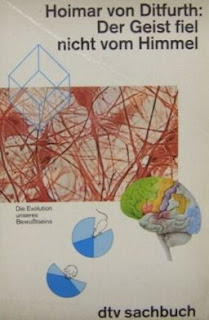 Ditfurth, Hoimar von "Der Geist fiel nicht vom Himmel: Die Evolution unseres Bewußtseins" [The mind did not fall from the sky: the evolution of our consciousness] - 1976

Hoimar von Ditfurth was a German physician and scientific journalist. As early as 1978, he warned of man-made climate change. Hence, I have been a fan of him for most of my life. He always wanted to let the general public participate in the knowledge of the sciences, and convey insights into the secrets of nature.

Quite a while ago, I found this book on a book swap shelf and was very keen to read it. Then, the 1976 club "forced me" to tackle it. That's also the reason, why I review the book here as well as on my German blog.

As a neuroscientist, the author knew a lot about human consciousness and it's a pity that such a great scientist has not been translated but that's typical.

Hoimar von Ditfurth has a lot to say about the human brain. According to him, this is a fossil in the human body consisting of three parts: the brain stem, the diencephalon, and the cerebrum. He starts explaining it with the very beginning, the very first life on earth and how it developed into what we see today. He also explains our behaviour, how it developed from imprinting to the expression of f consciousness (not only in humans). Really a great analysis of the history of the brain.

He explains everything very clearly and understandable, it is still a tough read.

I definitely want to read more of his books, e.g.

"Die Sterne leuchten, auch wenn wir sie nicht sehen" [The Stars Shine Even If We Don't See Them] - 1947-1988
"Im Anfang war der Wasserstoff" [In the Beginning there was Hydrogen] - 1972
"Wir sind nicht nur von dieser Welt" [We Are Not From This World] - 1981
"So laßt uns denn ein Apfelbäumchen pflanzen. Es ist soweit" [Let's Plant an Apple Tree. The Time Has Come] - 1985
"Innenansichten eines Artgenossen" [Inside Views of a Fellow of the Same Species] - 1989

"In truth we only know that there has to be a real, objective world, evolutionary considerations force us, however, to realize that our brain has definitely not yet reached the level at which its capacity is sufficient for the sum of all properties of this world. - Based on this provocative core sentence, Ditfurth attempts to present the emergence of human consciousness as a necessary result of a development history billions of years. He traces this path with an abundance of examples - from the first single-celled organisms to the human cerebrum that the emergence of consciousness also followed the basic principle of evolution, namely that every development step serves the biological purpose of improving the chances of survival, and not the aim of providing the organism with information about its environment that is as objective as possible."

If you are interested in this subject but don't read German, I can recommend some other books:
Bryson, Bill "The Body. A Guide for Occupants" - 2019
Harari, Yuval Noah "Sapiens. A Brief History of Mankind" (Hebrew: קיצור תולדות האנושות/Ḳizur Toldot Ha-Enoshut) - 2014
- "Homo Deus. A Brief History of Tomorrow" - 2016
Sapolsky, Robert M. "Behave: The Biology of Humans at Our Best and Worst" - 2017