That's a tough one. I enjoy reading books about history or about real events but I don't ever select them for their setting. 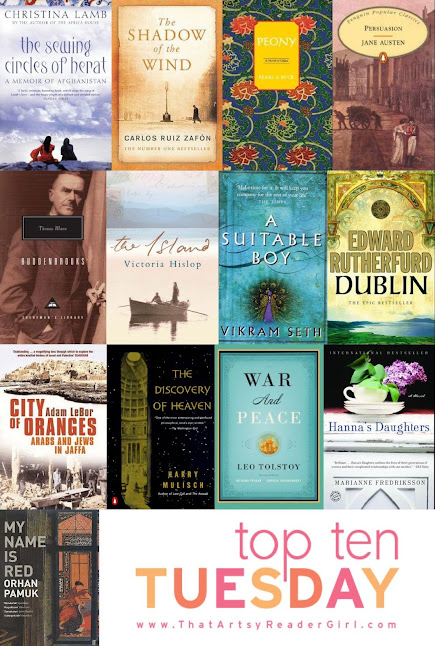 Afghanistan because their story is just too important to be ignored. And Christina Lamb has told the story of the women and girls in this torn country.
Lamb, Christina "The Sewing Circles of Herat: A Personal Voyage Through Afghanistan" - 2002

China because Pearl S. Buck was my first adult book love. I read many other books about this huge and interesting country but this was my first.
Buck, Pearl S. "Peony" - 1948

Germany because it's my country. Thomas Mann because he is one of my favourite authors and "Buddenbrooks" one of my absolute favourite books and I just love Lübeck.
Mann, Thomas "Buddenbrooks: The Decline of a Family" (German: Buddenbrooks) - 1901

Greece because I've been there and love their country and because Victoria Hislop is one of my favourite authors. And I've been to the Island of Spinalonga.
Hislop, Victoria "The Island" - 2005

India because it's such a fascinating country. One of the first books I read was "A Suitable Boy" and it tells us so much about the life of the people there.
Seth, Vikram "A Suitable Boy" - 1993

Ireland, my favourite country in the world. Edward Rutherfurd has written many sagas about all parts of the world but the one about Ireland is probably my favourite.
Rutherfurd, Edward "Dublin: Foundation" (aka The Princes of Ireland: The Dublin Saga)" - 2004

Israel because I've been there and absolutely loved it and their history will forever be intertwined with that of my country. "City of Oranges", there is so much history in this book about how the states of Israel began, what was before and what it led to today.
LeBor, Adam "City of Oranges" An Intimate History of Arabs and Jews in Jaffa" - 2006

Netherlands because I've lived there for two decades. There are quite a few interesting books about the country and its history. But this one by Harry Mulisch has been selected the favourite book of the nation and I thought that is good enough to include it here. It is fantastic, by the way.
Mulisch, Harry "The Discovery of Heaven" (Dutch: De Ontdekking van de Hemel) - 1992

Russia because I love Russian literature. There are so many great authors here and it was tough to choose just one but in the end I decided for this one:
Tolstoy, Lew Nikolajewitsch (Толстой, Лев Николаевич) "War and Peace" (Russian: Война и мир = Woina i mir) - 1868/69

Scandinavia because it's such a beautiful area. Again, tough to decide. I love Astrid Lindgren as much as Marianne Fredriksson but I decided in the end for this one where the life of women in the last century is described so well.
Fredriksson, Marianne "Hanna's Daughters" (Swedish: Anna, Hanna og Johanna) - 1994

I could have carried on with Japan, the USA and many, many other countries but I thought thirteen is already three more than ten, so here you go.

Do you have a favourite setting? Even if you don't participate in the Top Ten Tuesday challenge, maybe this would be a topic you could just write one post about.