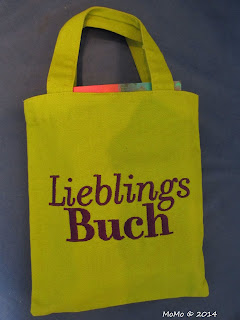 May I introduce my favourite bag saying "favourite book" in German. I have had this for years (as you can see from the copyright, even then it was a couple of years old) and take it everywhere. My handbags have to be big enough for it to fit in there because only then can I take a book with me wherever I go.

When I first saw this topic, I thought, I know I've done this before. And yes, it's been eight years ago. The challenge was Top Ten Book Turn-Offs and mine were:

10. Books with movie covers.
9. No description of the book on the cover.
8. Spoilers in the introduction.
7. Description of clothes.
6. Mentioning shoes.
5. Bad translation.
4. Contradictions within the story or even compared to real life.
3. Wrong dates.
2. Wrong grammar, wrong spelling.
1. Bad language.
None of that has changed, I still loathe all of those facts. But, of course, there are other events that can make me mad.

One would be: Sequels coming out a different size to first book. I like my series to match. But that isn't the worst one.

And since we're on the topic already, cover redesigns after they have been turned into a movie! I think they do it because they hope to sell the books with the new cover to those who liked the movie. But they don't make them attractive to those of us who hate movies made after our books (see here).

I also hate that paperbacks are published later than hard covers. Now it's bad enough with English books but in Germany it might take years until they publish it in paperback. With the result that I hardly ever read any new German books and by the time they appear in paperback, I have forgotten that I liked the description when I first heard about it.

Then there is something I love when it's there, but it doesn't happen very often. I love to have maps about the area, so I know what the author is talking about. Also, when there is a historical notion, a timeline of what happened in real life is very helpful. I know I can get all that information on the internet nowadays but it's nicer to have it right then and there while reading.

Another thing we book lovers hate is when a book we ordered online is damaged. I don't like ordering online much but my local bookshop often has problems getting a foreign edition for me, so I have no choice but to use one of the online bookshops. It's really annoying when they arrive damaged.

And the last biggest problem is:
How will I ever get through my TBR pile before I die?

I hope Jorge Louis Borges is correct and paradise is like a library. Sigh!