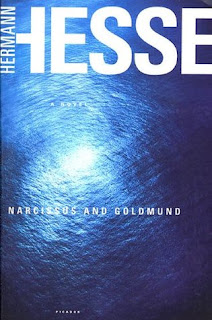 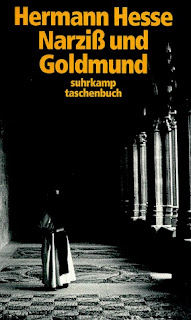 A friend of mine was surprised that I never read this book. Well, we can't have read all the books available and I had read three other books by Hermann Hesse before. Still, she had a DVD of the film they made in 2020 (see here) and then she lent me her copy of the book. Thanks, Elisabeth.

They are both great works though, as so often with films, you cannot compare the two. The ending is pretty different and there are parts that are larger in the book than in the film and vice versa. Why do they always have to do that? I have no idea.

This is a much acclaimed book and supposedly one of Hesse's best. I can well understand that. It is a great novel with many layers and much information about life in the middle ages.

I have enjoyed the book very much though I find it hard to say why. Certainly, the writing is superb and the description not just of the two main characters but also all the other ones is fantastic. Maybe I just say it's magical and - like magic - not explainable.

Of course, I cannot vouch for any translations as I have read this book in the original German language.

"Narcissus and Goldmund is the story of two diametrically opposite men: one, an ascetic monk firm in his religious commitment, and the other, a romantic youth hungry for worldly experience.Hesse was a great writer in precisely the modern sense: complex, subtle, allusive: alive to the importance of play. Narcissus and Goldmund is his very best. What makes this short book so limitlessly vast is the body-and-soul-shaking debate that runs through it, which it has the honesty and courage not to resolve: between the flesh and spirit, art and scientific or religious speculation, action and contemplation."

"Narcissus is a teacher at Mariabronn, a monastery in medieval Germany, and Goldmund his favourite pupil. While Narcissus remains detached from the world in prayer and meditation, Goldmund runs away from the monstery in pursuit of love. Thereafter he lives a picaresque wanderer's life, his amatory adventures resulting in pain as well as ecstasy. His eventual reunion with Narcissus brings into focus the diversity between artist and thinker, Dionysian and Apollonian".

Hermann Hesse received the Nobel Prize for Literature in 1946 "for his inspired writings which, while growing in boldness and penetration, exemplify the classical humanitarian ideals and high qualities of style".